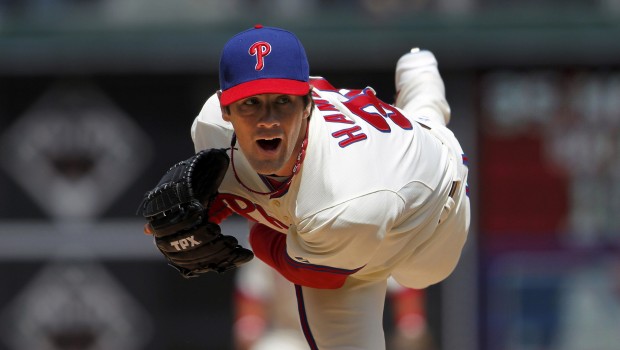 Red Sox
The Sox are reportedly on Hamels’ updated no-trade list, which includes 20 teams, so they would probably have to pick up his $20 million option for 2019 in order to get him to waive that clause. That would not be a problem for them (or any team for that matter).

Boston revamped its starting staff by adding Rick Porcello and Wade Miley to go with Clay Buchholz and Joe Kelly, but the Sox missed out on the Jon Lester sweepstakes. General manager Ben Cherington knows he needs a top-of-the-rotation starter to dramatically improve his club’s standing in the American League East. Boston starting pitchers combined for a 4.36 ERA in 2014, which ranked 26th in the Majors.

Luckily for the Red Sox, they have accumulated enough prospects to fulfill the Phillies’ needs of quality and quantity for Hamels. A package centering around outfielder Mookie Betts and catcher Blake Swihart would be a significant step toward acquiring the 30-year-old southpaw.

The Dodgers reportedly pursued Hamels at the trade deadline, but discussions stopped quickly when the demand was their three top prospects: shortstop Corey Seager, outfielder Joc Pederson and left-hander Julio Urias. With a new front office in place, it is entirely possible that they re-visit those discussions.

The Dodgers could use protection in their rotation with Zack Greinke likely to exercise his opt-out clause at the end of the season, and Hamels, who would love to pitch closer to where he grew up in Southern California, is an ideal replacement.

A package starting with Pederson and Urias would certainly grab Ruben Amaro’s attention, and adding Hamels would give the Dodgers the best rotation in the game for 2015.

Padres
No one could have guessed that the most aggressive GM this winter would be first-timer A.J. Preller, but he has shown willingness to wheel and deal. His offense has been dramatically revamped by adding outfielders Matt Kemp, Justin Upton and Wil Myers, without having to give up Austin Hedges, Matt Wisler or Hunter Renfroe, three of his top prospects.

Because of that, and Preller’s unpredictable style, the Padres are well positioned to acquire a top-of-the-rotation starter and shock the baseball world again. Two of those prospects plus another mid-level prospect would put Preller near the top of the list to acquire Hamels, completing one of the most surprising winters in Padres history. Remember, Hamels grew up in San Diego, so it’s hard to imagine he’d have a problem being traded there. And by the way, his career 1.78 ERA at Petco would fit nicely as well.

Cardinals
With one of the game’s best rotations year in and year out, the Cardinals’ recipe for winning has been to maintain a top-notch staff. After trading Shelby Miller to Atlanta, while wondering if Michael Wacha can return to form, GM John Mozeliak made it clear he wants another high-end arm with his interest in Jon Lester. Getting Hamels would satisfy that desire.

A trade package starting with right-hander Carlos Martinez and left-hander Marco Gonzalez or outfielder Randal Grichuk would be hard to part with, but adding Hamels would also help the Cardinals maintain their elite rotation.

GM Jerry Dipoto has made a concerted effort to accumulate prospects for his farm system, but his starting rotation could use another quality arm at the top end to complement Jered Weaver, especially with Garrett Richards possibly set to miss time at the beginning of the year.

By starting the negotiations with newly acquired left-hander Andrew Heaneyand outfielder Kole Calhoun or pitching prospect Sean Newcomb, it should get them in the conversation for Hamels’ services. (Note: Newcomb was drafted last July and can’t be traded until a year later, so he’d have to be a player to be named later in any trade.) It remains to be seen if the Angels system has been re-stocked enough to finish the deal.