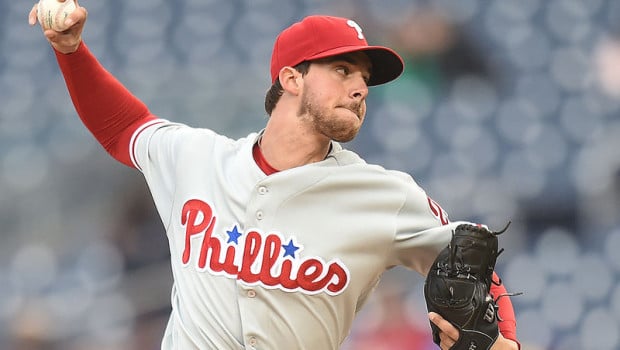 The suddenly hot-as-a-pistol Phillies are shooting for their sixth win in seven games tonight against the Reds.

Home, however, hasn’t been nearly as comforting for the 22-year-old. He’s allowed a combined 11 runs and 13 hits over 12 innings while dropping both outings.

Nola will try to reverse that trend as he makes his first start at home since April 16 when he allowed a career-high seven runs over five innings in an 8-1 loss to Washington. He’s 2-0 with a 1.33 ERA over his last four outings – all Phillies wins.

Nola (2-2, 3.13 ERA) was sensational in his only career meeting with Cincinnati. He allowed one run with eight strikeouts over seven innings in a 3-2 loss April 6.

Adam Duvall had two of the team’s four hits in Friday’s 3-2 series-opening loss that ended a seven-game winning streak over the Phillies, who are six games over .500 for the first time since finishing 2011 with a franchise-record 102 wins.

Cincinnati hopes to get something going for Tim Adleman. After allowing two runs and three hits over six innings in a 6-5, 11-inning win at Pittsburgh in his major league debut, he gave up one run and four hits over five in Friday’s 5-1 home victory over Milwaukee.

Tyler Goeddel, who entered last night’s game batting .158, had the big blow with a two-run triple in a three-run fourth inning. The rookie had dropped Tucker Barnhart’s fly ball down the left-field line, allowing two runs to score in the second.

Starter Jeremy Hellickson drove in the go-ahead run on a suicide squeeze. Odubel Herrera went 0 for 3 with a walk after hitting safely in 21 of his previous 22 games.

”We have to play small ball,” manager Pete Mackanin explained. ”We don’t have the pop to wait for a three-run homer. We have to take what we can.”