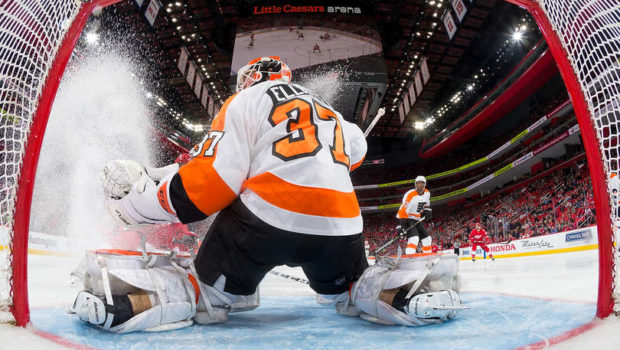 Travis Konecny scored 27 seconds into overtime for the second straight game to give the Flyers a 3-2 win over the Detroit Red Wings.

“We keep finding a way,” Flyers coach Dave Hakstol said. “There were stretches where we weren’t great tonight, but we got two more points at the end of the night.”

“I don’t know what’s working — it might just be that we aren’t thinking out there, we’re just having fun,” Konecny said. “I always know [Couturier] is going to get me the puck in a good spot.”

Couturier chipped the puck away from Red Wings forward Dylan Larkin and over the blue line before Konecny could clear the Detroit zone. He got his right skate on the blue line before touching the puck, and then turned, skated to the right face-off circle, and beat Mrazek from the dot.

“We won a puck battle and we got it on net,” Hakstol said.

The call on the ice that Konecny tagged up and legally entered the zone was confirmed by video review.

Jakub Voracek had a goal and an assist, Andrew MacDonald scored, and Couturier had two assists for Philly.