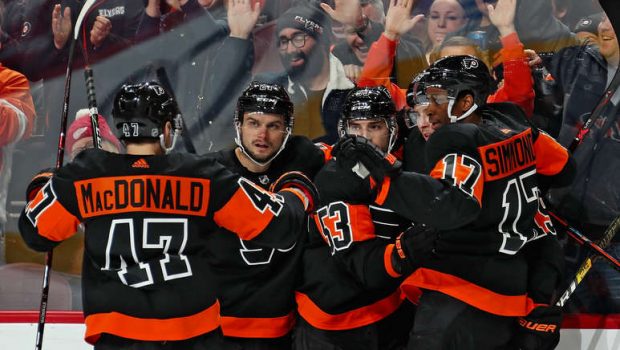 How good are the Flyers?

It’s easy to get swept up in the excitement wave of a team that has won 12 of its last 14 games to revive its season and have a shot at the playoffs after being left for dead.\

But tonight’s game at the Wells against the league-best Tampa Bay Lightning has a “rubber-hits-the-road” quality about it.

The Flyers improved to 12-1-1 in their past 14 games when they earned a 3-1 road win over the Detroit Red Wings on Sunday. One night earlier, the Flyers blew a 5-1 lead but still beat the visiting Red Wings 6-5 in overtime.

Rookie goaltender Carter Hart, the league’s Rookie of the Month in January, topped Detroit twice to bump his record to 13-6-1. Hart recently won eight in a row, which tied a league record for goaltenders under the age of 21. Hart, 20, has won 10 of his past 11 games.

“I’m not trying to get too far ahead of myself or live in the past,” Hart said. “I just want to worry about every challenge that I’m presented with.”

Oskar Lindblom scored twice Sunday and Ivan Provorov added a goal for the Flyers, who are within six points of the final Eastern Conference wild-card playoff position. It was the first career two-goal performance of Lindblom’s career.

On Saturday, Flyers captain Claude Giroux was taken down on a questionable hit by Detroit’s Anthony Mantha. In the first minute of the Sunday rematch, Philadelphia’s Wayne Simmonds sought out Mantha for a fight. It helped catapult the Flyers to yet another victory.

“I just had to finish it off really quick and get back to playing hockey,” Simmonds said. “You just want to make a stand that we’re not going to get bullied. If teams are going to try that, we’re going to step up and defend one another.”

The Lightning continued to prove their mettle as the NHL’s best with a 5-1 road victory over the Columbus Blue Jackets last night.

Tampa Bay won its sixth straight game, having produced at least five goals in five of those contests. Lightning goalie Andrei Vasilevskiy was on the verge of his third consecutive shutout before the Blue Jackets’ Lukas Sedlak scored with 1:45 remaining.

Lightning winger Nikita Kucherov, who leads the league with 99 points, recorded his second five-point game of the season. He collected his 28th and 29th goals of the season to go along with three assists.

Kucherov has seven goals and 11 assists in his past five games.

“He’s a special player,” Tampa Bay coach Jon Cooper said postgame Monday. “The night when you are not your best, the team is not at its best, a big-time player came to play and our goaltender held us in. We felt pretty fortunate to come away with two points tonight.”

Brayden Point contributed two goals and an assist, yet he wound up raving about Kucherov.

“Every time he’s on the ice, he makes something happen,” Point said.

Tampa Bay, which has a league-high 21 road wins, is 8-0-2 over its past 10 games. The road trip continues with the second leg of a back-to-back set in Philadelphia.

Lightning defenseman Victor Hedman left after the first period Monday with a lower-body injury and didn’t return. His status for the Tuesday game was unclear.

“I don’t think it will be too serious,” Cooper said mid-game on NBCSN regarding the extent of Hedman’s injury.