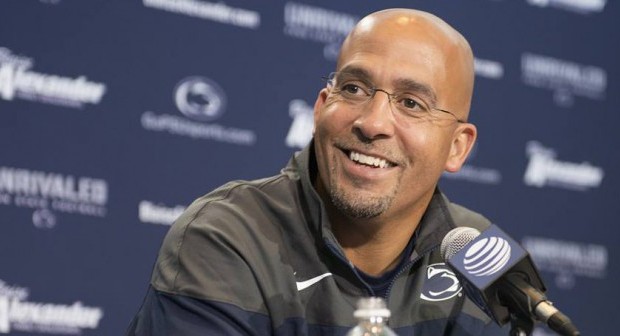 RECRUITING BONANZA PUTS PENN STATE BACK ON THE NATIONAL MAP

If you want to know how much better Penn State’s recruiting is this year, check out the experience of offensive recruiting coordinator/wide receivers coach Josh Gattis.

Penn State’s 2015 recruiting class features 25 members and is ranked No. 15 in the nation by Rivals and is 11th when all the major recruiting services rankings are averaged. The 11 in-state prospects are the most Penn State has had since 2004 and having all of Penn State’s assistant coaches chip in to work on in-state recruiting is part of the staff’s on-going plan.

Penn State relies on its summer recruiting camps to get accurate workout numbers on prospects, and members of the coaching staff traveled to satellite camps in Georgia and Florida to continue bolstering future recruiting ties in the south. With a year of relationship-building under their belts, coach James Franklin (photo above) is pleased with how the pieces are falling into place.

The 2015 class is the first group of prospects his staff was able to recruit fully after taking over 13 months ago, and fans gathered in Penn State’s Rec Hall Wednesday night for The Signature Event, where Franklin discussed every member of this recruiting class while their highlights played.

“First thing is to come in and make some really bold statements in your press conference and not give yourself any other choice,” Franklin said at the news conference.

“If you make it a priority to keep the best players in this region home, you’re going to do that, and I think we can do better going forward. We got four of the top players in the country already committed to us for 2016. So, we’re excited. It never really ends.”

Penn State has three prospects from the class already on campus, and among them is offensive tackle Sterling Jenkins. Addressing the team’s need to upgrade the offensive line and continue building depth in the trenches was a focal point in this class. Jenkins, who enrolled as a 307-pound lineman and is already up to 326 pounds, has been joined by Lackawanna College (Scranton, Pa.) transfer Paris Palmer, another offensive tackle.

Finding Palmer, who has two years of eligibility remaining and was ranked as the nation’s No. 1 junior-college offensive tackle, helps to fill a vacancy opposite returning starter Andrew Nelson. It also follows through with the staff’s philosophy to figure out how to best address needs, even with the junior college route not Franklin’s preferred method.

While Penn State’s prospects have primary recruiters, having every assistant coach involved in the process continues to work in the team’s favor. Franklin called it a “system of checks and balances” where positional coaches, area coaches and himself take an interest in learning about the player, his background, his high school and continue building lasting relationships.

If one of Penn State’s assistants would end up taking a job elsewhere in the future, the prospect should have enough connections with other coaches at Penn State that he still feels comfortable, Franklin said. Not wanting players to know which coach is recruiting him is part of Franklin’s plan. Once they have a prospect on campus for camp, it helps solidify the evaluation that the staff continues building.

“The fact that you can get the kids here on campus and work them out in camp and see how they compete and see how coachable they are and things like that, that’s valuable information,” Franklin said. “That helps you in terms of eliminating mistakes. I think that’s probably a thing that’s not talked enough about … getting what people would call the high-end prospects, but also not making mistakes.

“I told these guys, we’re going to go out and recruit a class next year of guys to come in and take their jobs. That’s the mentality.”

Here are the players committed to Penn State (names in BOLD indicate the school has received his national letter of intent):