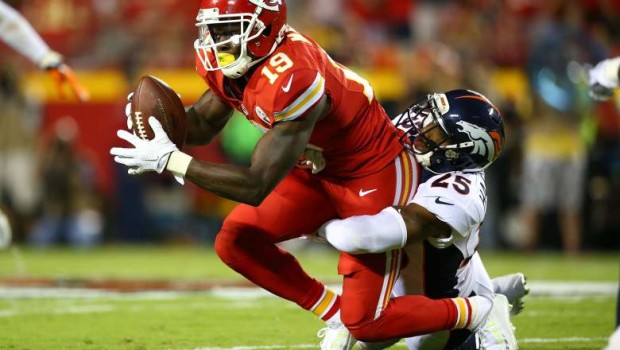 REALITY: EAGLES ARE OFF — FANTASY: EX-EAGLE MACLIN WORTH A PICK

Dez Bryant, WR, Cowboys: It will be at least another week before Dallas gets back quarterback Tony Romo, but the ballclub expects to see Bryant return Sunday. He’s still listed as questionable, but didn’t appear to have any setbacks in Friday’s practice. The matchup against Seattle isn’t ideal, but it’s Bryant so that really doesn’t matter. If he’s active, you play him.

John Brown, WR, Cardinals: Arizona’s talented young wideout missed practice Wednesday and Thursday. He would appear to be a game-time decision this week, and Coach Bruce Arians has hinted at resting Brown to get him fully healthy for the end of the season. Reportedly Brown participated on a limited basis Friday.

Carlos Hyde, RB, 49ers: The San Francisco tailback is dealing with a stress fracture, one that could require surgery. He’s considered a game-time decision for Sunday’s matchup, a tough one at that, against NFC West rival St. Louis.

Vincent Jackson, WR, Buccaneers: We’re listing Jackson here out of respect for his previous fantasy work, but in truth, Tampa Bay is just not passing the ball enough and with Mike Evans finally looking like his old self, Jackson’s days of being fantasy relevant are waning. He is dealing with a knee injury and is listed as doubtful for Sunday’s game against Atlanta.

Jeremy Maclin, WR, Chiefs: Owners may have been burned by his inactive status in Week 7, but he practiced in full this week and is in line to suit up against the Lions in London.

Marcus Mariota, QB, Titans: You didn’t draft Marcus Mariota to be your No. 1 quarterback, and if you did, then can I please play in your league next season? Mariota will sit out another week, too bad since it means missing what was shaping up to be a good fantasy matchup against Houston. Instead it will be Zach Mettenberger once again for the Titans.

Josh McCown, QB, Browns: McCown was limited in Friday’s practice and is listed as questionable after sustaining injuries to his ribs and shoulder in Cleveland’s loss in Week 7. It’s not a terrific matchup against Arizona, but the Cardinals are coming off a short week and McCown has played well against some strong defenses this season. Monitor his situation leading up to game time.

Ben Roethlisberger, QB, Steelers: All signs point to Big Ben returning in what is a crucial AFC Central matchup between Pittsburgh and the undefeated Cincinnati Bengals. Roethlisberger is listed as probable on the team’s injury report.