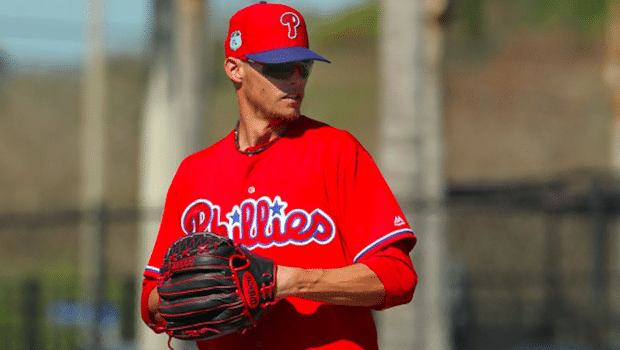 Buchholz spent the first 10 years of his career with the Red Sox, making two American League All-Star teams and helping Boston win the 2013 World Series. The Sox traded him to the Phillies in December. Davis, who gets the nod in his major league debut, spent last season with Double-A Pensacola and Triple-A Louisville.

“I look for him to have the same type of year as [Jeremy] Hellickson,” Phillies manager Pete Mackanin said about Buchholz. “He’s a similar type of pitcher. He relies on his command and control. When he mixes his pitches and changes speeds, that’s when he’s effective.”

Buchholz is looking to bounce back from a 2016 season in which his ERA shot up and his walk rate climbed from 4.9 to 9.4 percent. The righty threw 39.6 percent of his pitches in the strike zone, as judged by Statcast, which was down from 44.1 percent in ’15. Meanwhile, the rate at which opponents chased his out-of-zone pitches fell from 35.8 to 32.3 percent.