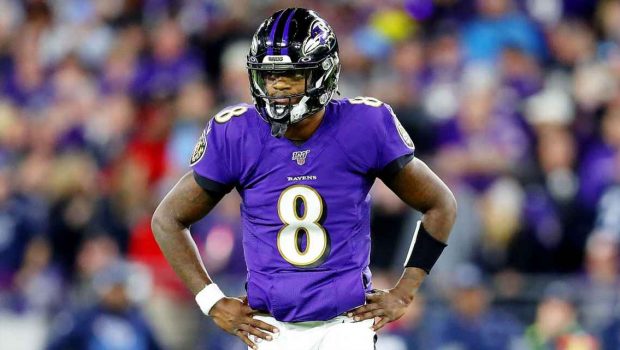 RAVENS LAMAR JACKSON SHOWS HIS AGE IN BLOWOUT BY TITANS!

Lamar Jackson and the Baltimore Ravens crashed and burned in a 28-12 divisional-round loss to the Tennessee Titans.

Jackson threw two interceptions and fumbled once in an uncharacteristic performance for the front-runner for NFL Most Valuable Player.

The Ravens suffered their first loss since Sept. 29 and became the first No. 1 seed to fall to a 6-seed since 2010. Baltimore also became the sixth team since the NFL playoffs began in 1933 to win at least 14 games in a season but fail to win a postseason game.

“We just beat ourselves,” Jackson said. “I had a lot of mistakes on my behalf. Three turnovers — that shouldn’t happen. But [Tennessee] came out to play.”

This marked the second quick exit from the playoffs for Baltimore. Last season, the Ravens lost to the Los Angeles Chargers 23-17 in the wild-card round. On Saturday, Baltimore was once again bounced from its postseason opener.

During the week, Jackson scoffed at the idea that he would be affected by a 20-day layoff, but he produced just the second three-turnover game of his career. The Ravens, who sat five Pro Bowl players in the regular-season finale before their first-round postseason bye, scored the fewest points by any team in its first playoff game after leading the NFL in scoring during the regular season.

“I don’t have that answer,” coach John Harbaugh said when asked if rust was a factor. “It’s unanswerable. Our guys practiced really hard and did the best they could. But we didn’t play a sharp football game, for sure.”

Was it the playoffs? Jackson didn’t want to talk about last season’s postseason problems. He is 0-2 in the postseason, compared to 19-3 in the regular season. He has five total turnovers in the playoffs after last year’s wild-card loss to the Chargers and Saturday’s divisional defeat to the Titans. Jackson had only eight turnovers in the entire 2019 season.

Asked about those who point out that he is winless in the postseason, Jackson said, “I don’t really care about what they say. This is my second year in the league. Most people [aren’t] able to bring it to the playoffs. I don’t really worry about [what] people say. We’re going to keep going [and] get ready for next year.”

In his first full season as an NFL starter, Jackson put up numbers previously unseen in the NFL. He became the first player to throw for 3,000 yards and rush for 1,000 yards. He led the NFL with 36 touchdown passes and broke Michael Vick’s single-season rushing mark for a quarterback.

But in the end, Jackson could become the first NFL MVP to lose his first playoff game of the season since running back Adrian Peterson did so in 2012. Meanwhile, it has been 20 years since a player won the MVP award and the Super Bowl in the same campaign.