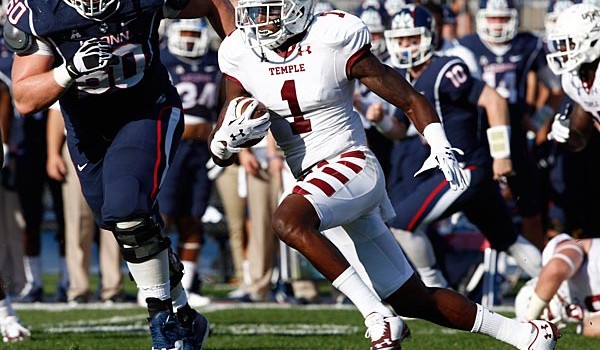 The Baltimore Ravens have drafted Temple’s Tavon Young with pick No. 104 on the third day of the NFL Draft.

Young, 5-9, 183-pound cornerback, is a native of Oxon Hill, Maryland. He went to Potomac High School in Prince George’s County where he was a football and track star.

Young was a starter the last two seasons at Temple and earned a reputation as a quick-footed playmaker. He came up with five interceptions the last two years and returned one of those turnovers for a pick-six.

Baltimore came into this year’s draft looking to add players in the secondary, and Young has the kind of playmaking ability the Ravens want at the position. He can make plays on the ball for a unit that wants to improve from having a franchise-low six interceptions last year.

Young is somewhat undersized for an NFL cornerback, but he could compete for a role as a nickel cornerback.

Young went from high school football and track star (his 4×100-meter relay team won at the Penn Relays, set Maryland high school record) in the Washington, D.C. area to a starting corner for two games for the Owls as a true freshman, intercepting two passes.

That success earned him a shared starting spot in his sophomore year (one interception, five pass break-ups). He became a playmaker as a junior, picking off opposing quarterback four times, leading the conference with 153 return yards and returning one interception for a touchdown. Young had surgery on his left knee before his senior year, but it didn’t stop him from excelling in his final campaign with the Owls.

His lack of statistical production kept him off all-conference teams in 2015 (41 tackles, five for loss, sack, seven pass breakups), but that was partially due to his ability to shut down opposing receivers.