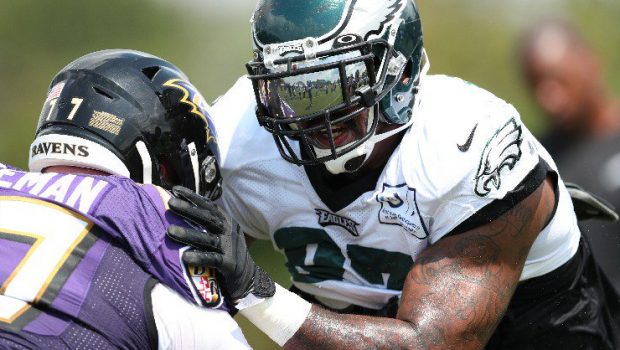 When the schedule was announced, the Eagles game against the Baltimore Ravens looked like an L for all the right reasons.

The Ravens are solid and have a talented QB in Lamar Jackson, and also a tough defense.

Now, with the Eagles wobbling with injuries and underachieving players, it looks even more like a loss.

Early money on Baltimore moved this line off the key number of 7 as most sportsbooks were offering the Ravens -7.5 as of Monday night. Baltimore is 4-0-1 ATS as a road favorite of 7 points or more since the start of last year. The Eagles, meanwhile, haven’t been a home underdog of more than 7 points since 2006.

The Ravens proved last week that they don’t just rely on the arm and legs of reigning MVP Jackson. Seven different Baltimore players recorded sacks as the Ravens held Cincinnati scoreless until late in the fourth quarter, when the Bengals kicked a meaningless field goal to spoil the shutout.

That made life a lot easier for Jackson, who threw for only 180 yards and rushed for just three yards after missing a couple of practices earlier in the week due to a sore knee and stomach issues.

Baltimore’s defense also continued an impressive streak by generating at least one turnover for the 18th consecutive game. Patrick Queen returned one of Cincinnati’s fumbles 52 yards for a touchdown, the Ravens’ second defensive score of the young season.

Baltimore is now third in the NFL with 10 turnovers forced and should like its chances of extending the streak this week against the Eagles, who have committed a league-high 11 turnovers.

As good as the Ravens have been at home lately, they’ve arguably been even better on the road. Baltimore is 6-0-1 ATS in its last seven on the highway, where it’s held 10 of its last 11 opponents to 23 points or less.

If the Eagles are going to turn things around after a 1-3-1 start to the campaign, they need to figure out how to generate more offense at home. Philadelphia has not scored more than 23 points in any of its last eight games at Lincoln Financial Field, where the Eagles are 1-6 ATS in their last seven and have gone UNDER in eight of their last nine.

Philly looks to build on last week’s 29-point performance at Pittsburgh, when second-year receiver Travis Fulgham broke out for 10 receptions, 152 yards and a touchdown. Fulgham is emerging as the No. 1 receiver in the absence of DeSean Jackson and Alshon Jeffery, who have combined to play just 16 games since the start of last season due to various injuries.

Quarterback Carson Wentz could certainly use a dependable option to throw to after tossing two more interceptions last week, increasing his league-leading total to eight. Outside of a 74-yard TD run by Miles Sanders, the Eagles’ ground game also continued to struggle against Pittsburgh, with Sanders mustering just six yards on his other 10 carries.