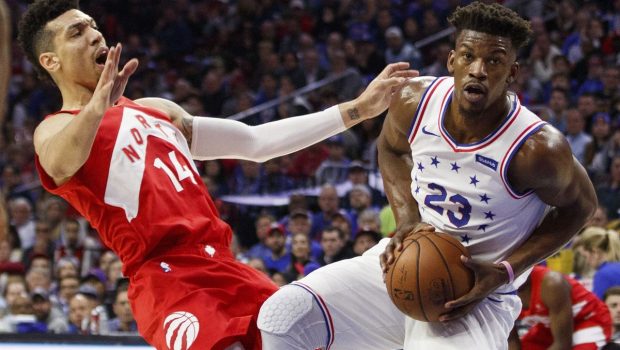 Kawhi Leonard scored 39 points including a three-pointer with 1:01 to play to lift the Toronto Raptors to a 101-96 win over the Sixers.

And now the Sixers and Raptors head back to Toronto for Tuesday’s Game 5 of their best-of-seven Eastern Conference series all tied up at two wins apiece.

Leonard shot 13-for-20 in 42 minutes and grabbed a team-high 14 rebounds on another magnificent night. He has 152 points through the four games of this series. And for the first time in a couple of games, he got some decent help from his teammates. Marc Gasol had 16 points, Kyle Lowry had 14, Serge Ibaka chipped in with 12, and Danny Green had 11.

Lowry, Gasol and Ibaka had been a horrible 4-for-22 combined in Game 3.

A day after he was listed as doubtful with a calf injury, Pascal Siakam started for the Raptors, but the lingering injury seemed to affect his shooting – the team’s second-leading scorer in the post-season went 2-for-10 for nine points.

Jimmy Buttler had 29 points, while JJ Redick had 19 for Philly. The Raptors held Joel Embiid, who had scored a playoff career best 33 points on Thursday, to just 10 points.

Lowry and the Raptors traditionally bounce back after big losses, and there’ve been few bigger losses than Thursday’s 116-95 rout that made Sunday’s matchup a “must-win” according to Lowry, and one of the most important in franchise history.

The Raptors were 5-1 after back-to-back losses in the regular season, and hadn’t lost three straight since Nov. 12-16. And they revved up their intensity from the get-go, particularly on the defensive end, assembling an 11-point first-quarter lead.

Lowry cranked up his intensity about five-fold, blowing past Simmons and feeding Ibaka for a first-quarter dunk. A Raptors fan stood in the arena’s aisle and rocked an imaginary baby two days after a showboating Embiid did the same thing.

The Sixers took their first lead since early on a minute into the third quarter and would go up by five in front of a raucous capacity Wells Fargo Center crowd of 20,639 fans that included Julius (Dr. J) Erving, retired NFL star Terrell Owens, and Eagles quarterback Carson Wentz.

The Raptors responded. And when Lowry dished to Siakam for a dunk, the power forward’s first field goal of the game, it capped a 7-0 Raptors run and put Toronto back up with 4:15 left in the third quarter.

The fourth quarter started all tied up at 75-75.

In a final nailbiting 12 minutes, a Butler three-pointer had the Sixers up by three before the Raptors slugged back with a 6-0 run to go up by three with 4:55 to play. A Redick three-pointer sliced Toronto’s advantage to just a point with 2:08 left, then with 1:01 on the clock, Leonard launched a three-pointer over Embiid as the shot-clock buzzer sounded, putting Toronto up by four points and all but clinching the victory.

Game 6 will be back in Philly next Thursday. The series would return to Toronto for Game 7 if necessary.