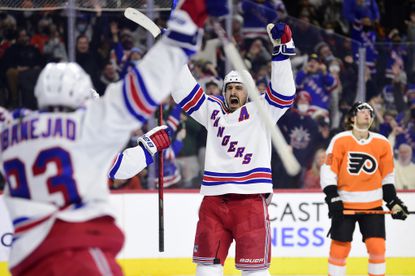 Oskar Lindblom and Cam York scored for the Flyers, who dropped their seventh straight. Carter Hart made 24 saves.

“We know that we need a win and you start playing to think about only that result and quite often you forget about that one little thing you have to do right at that moment,” interim coach Mike Yeo said.

“It’s very challenging when you’re dealing with the stress and emotion of going through a losing streak like this. You have to make sure you continue to stay focused on the process.”

The Flyers didn’t get their first shot on goal until a little more than nine minutes left in the first, but they got on the board soon after when Lindblom finished a rebound from in close. It ended Shesterkin’s shutout streak at 133 minutes, 41 seconds.

New York nearly took the lead with 3:43 left in the period, but Flyers defenseman Keith Yandle batted the puck off the goal line after Chytil’s backhander got behind Hart.