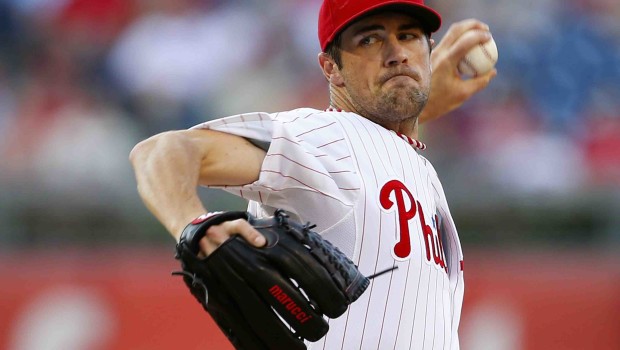 IF RANGERS (DARVISH OUT FOR YEAR) CALL, PHILLIES CAN DEAL HAMELS

As if they needed any more heartache, the Texas Rangers confirmed Friday morning that Yu Darvish, one of the best pitchers in the world, will undergo season-ending Tommy John surgery.

So now is the time to dial up the Phillies to change their luck.

The Phillies haven’t been especially lucky this spring, either, as former Rangers star Cliff Lee’s arm issue has flared up again, and he appears to be pitching on borrowed time. In any case, the Phllies need to continue their rebuild no matter what’s going on with Lee. They need to trade Lee’s locker mate Cole Hamels, and the Rangers should be the obvious landing spot for Hamels at this point.

The Rangers are said to have stayed in touch with Philly periodically regarding Hamels, and while a person familiar with their talks suggested “nothing’s fresh” at the moment, it makes too much sense not to step up those discussions. The Red Sox, Cubs, Dodgers, Padres and others have been tied more frequently to Hamels, but Texas is the team that makes the most sense.

The Rangers have liked Hamels for a long time, too. A few years back, the teams talked about a deal that would have sent third-base prospect Mike Olt and presumably others to Philly for Hamels. That won’t happen now, as Olt has since been dealt to the Cubs where he happily appears to on the verge of resurrecting his once promising career after a beanball incident. But Texas has other young players to deal.

At present, it’s fair to say Texas has the greatest need, too. Derek Holland is coming along slowly in spring. Colby Lewis is a solid veteran. But most of the rest of the staff is like a tryout camp.

Ross Detwiler has been impressive so far, basically locking up a spot within days of arriving here. Word is, they like what they’ve seen from second-year men Nick Tepesch and Anthony Ranaudo, a Red Sox import, so far. After that, Nick Martinez and hard-throwing Ivy League journeyman Ross Ohlendorf are also in a blurry rotation picture.

The Phillies haven’t seemed nearly satisfied with the offers they’ve received for Hamels, like Darvish one of the game’s best pitchers. Maybe that shouldn’t be a surprise since he has $96 million to go over four years. They had to find a team with a stark need, and this may finally be it.

While there are questions about Hamels in the American League (he hasn’t been especially good in interleague games), the Rangers have no choice now. Dillon Gee and Ryan Vogelsong are fine pitchers, but they need a season saver at this point.

The Rangers also may be able to do it without surrendering several top prospects. The Phillies are said to be asking for three very good prospects, preferably one who will be ready soon. Some have complained that Phillies GM Ruben Amaro, who needs to make three more trades to complete this phase of the needed rebuild, is asking for too much. Maybe he is, but if the examples of too much are Mookie Betts or Blake Swihart, I’m not sure he is.

Hamels is a game changer.

While Hamels’ contract isn’t exactly of the bargain-basement variety, with $96 million left over four years it looks better than comparable lefty Jon Lester’s $155 million for six. A healthy Hamels is worth it. While Lester gets a slight edge here for extra toughness, Hamels would give the Rangers, a two-time World Series entry, real hope.

Boston has been seen as a possible spot for Hamels, and Philly has extensively scouted them (especially Betts and Swihart, who apparently aren’t going anywhere). But the Red Sox would be way over the luxury-tax threshold if they got Hamels.

The Cubs already added their ace in Lester. The Dodgers have the money but they already have two aces. The Padres have to be nearing their dollar limit by now, and appear to be concentrating on Cuban infielder Hector Olivera at the moment.