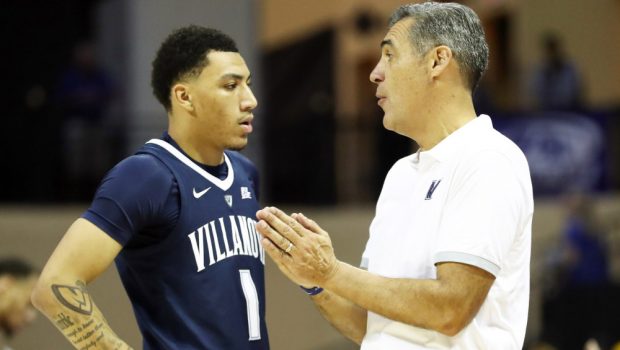 QUINERLY TURNS IT AROUND FOR VILLANOVA’S 81-58 WIN OVER UCONN!

Jahvon Quinerly had the steal of the game and scored 10 points in critical minutes, and Villanova avoided its first three-game losing streak in nearly six years with an 81-58 win over Connecticut on at Madison Square Garden.

“He showed that he’s been working at what we do even though he hasn’t been playing,” coach Jay Wright said.

Quinerly, a star recruit who originally committed to Arizona, has had a baffling freshman season. He struggled to get off the bench and missed a game with an injury. Quinerly played only seconds against Penn and was benched against Kansas days after writing an Instagram post criticizing his own program. He turned social media outbursts into highlight-reel bursts against the Huskies (9-4).

Quinerly quickly deleted an Instagram post that said “Was my 2nd choice for a reason” after the Penn loss. But social media users noticed and Quinerly later apologized on, yes, social media.

“It was a big mistake on my end,” he said of the caption.

Wright turned the mistake into a teaching moment.

“I told him, I know that’s frustration. I know it’s not you,” Wright said. “I knew he felt terrible.”

Quinerly, who played 24 minutes, shot an airball and threw a pass straight into UConn’s hands in the first half. But he hit a 3 in the first half and had the game’s spotlight “drive of the game” with a midcourt steal during a 19-0 run that he fed to Phil Booth for an easy basket.

He seemed at ease with the pressure off — when a corner 3 rattled around the rim before it trickled out, Quinerly smiled at the oh-so close attempt.

“I feel like the airball kind of helped me,” he said. “I knew that I could keep playing after that. I couldn’t let it affect me at all.”

Eric Paschall scored 21 points and Booth had 18 for Villanova. The Wildcats (9-4) had been reeling with consecutive losses at college basketball’s most renowned venues; against Penn at Philly’s Palestra and to No. 1 Kansas at Allen Fieldhouse. The Huskies seemed primed to make it three straight holding a 36-35 lead at the Garden, where the Wildcats celebrated the last two Big East Tournament titles.

Unlike their recent defeats when they wilted down the stretch, Villanova flashed the horsepower of old and unleashed a 19-0 run that sent fans into a frenzy. Joe Cremo hit three 3s during the spurt that made it hard to believe this was the same program that already matched the season loss total from each of the last two seasons.

Cremo stepped into the starting lineup once Quinerly smacked Gillespie during a drill in practice on Thursday. Cremo, a graduate transfer from Albany, made the most of his new role.

The Wildcats hadn’t lost three straight since January 2013 against Syracuse, Pittsburgh and Providence in the last season of the old Big East. The Wildcats have won two national titles since then and a loss here or there had seemed more like a minor inconvenience. But after losing four stars from last year’s title team to the NBA, Villanova has struggled, though three losses have come to Top 25 teams.