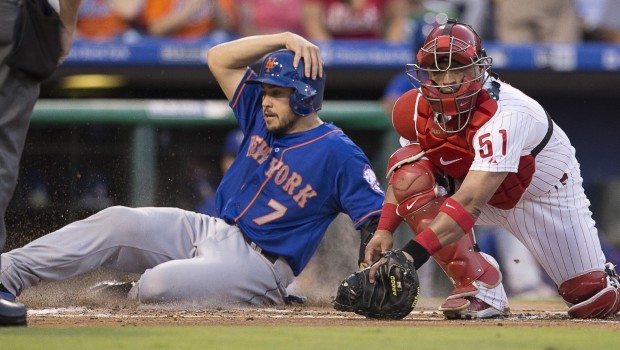 On Monday night the Mets bashed the Phillies into submission, jacking eight home runs in a 16-7 victory.

But last night at the Bank, memories of the rivalry that energized Philly and New York were revived in a big way in the Mets’ 6-5 win.

From there, the complaints moved past the quick pitch, with bench coach Larry Bowa ultimately earning an ejection. But before he departed, he appeared to gesture and yell at first baseman Daniel Murphy, apparently still upset at a demonstrative bat flip following his homer Monday night.

“It started off as Larry standing up for one of his guys,” said Murphy, who declined to elaborate on what Bowa screamed from the dugout. “I know tensions are high. It escalated from there.”

What was lost, perhaps, was that Robles ultimately struck out Ruf to help the bullpen nail down a comeback victory by the Mets.

Noah Syndergaard allowed four runs — two earned — in five innings. And though he allowed a pair of homers that put the Mets in a 4-3 hole, the rookie emerged with his first road victory of his career.

Despite all the hand-wringing about his statistical splits — 7-1 with a 1.82 ERA compared with 0-5 and a 5.05 ERA on the road entering Tuesday night — Syndergaard struck out nine.

With the bases loaded in the sixth, Travis d’Arnaud worked a walk to force in the tying run. Cuddyer followed with a pinch-hit single off reliever Jeanmar Gomez to knock in a pair of runs that put the Mets ahead 6-4.

The Mets’ bullpen held the lead — with Jeurys Familia nailing down a four-out save — even though they irked the Phillies.
Former Met and current Phillie Jeff Francoeur contended that though the quick pitch was legal, Robles committed a breach of etiquette because Ruf’s head was still down. Bowa, who left the clubhouse before commenting, apparently thought the same.

However, Mets manager Terry Collins contended that Robles did nothing wrong.

“I just said until they make the pitch illegal, you can do it,” said Collins, who at one point approached the dugout to calm Bowa, a longtime friend and former colleague. “We see it all the time.”

Through a translator, Robles said he was surprised that the Phillies reacted so strongly to “something that I’ve done before.”

Asked if he had noticed that Ruf’s head was down, Robles said he was “ready to execute my pitch” as soon as Ruf was in the batter’s box.

“I’ve been quick pitched by a lot of teams,” Cuddyer said. “When we were home the last time, every single reliever that we played against did a quick pitch. It’s part of the game. It’s a legal pitch.”