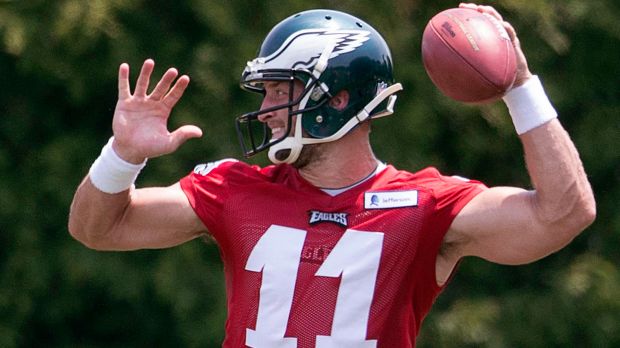 QB TIM TEBOW STEPS IT UP AT TODAY’S EAGLES OTA

Guess who had a pretty good day at today’s Eagles OTA.

He improvised on one play near the goal line; and threw a beautiful touchdown pass to rookie first-round draft pick Nelson Agholor, also from in the red zone.

“It’s fun, with the tempo, it’s a lot of fun,” Tebow said of the Eagles’ offense. “To get athletes in space, spread it out, to have the play-option. It’s looks the same, but it keeps the defense on its heels.”

This is week three of OTAs. Next week is the team’s three-day mandatory minicamp, and then nothing until training camp opens Aug. 2.

“I feel like I’m getting better every day, going through the reads a little faster, the drops a little quicker,” Tebow the assembled media.