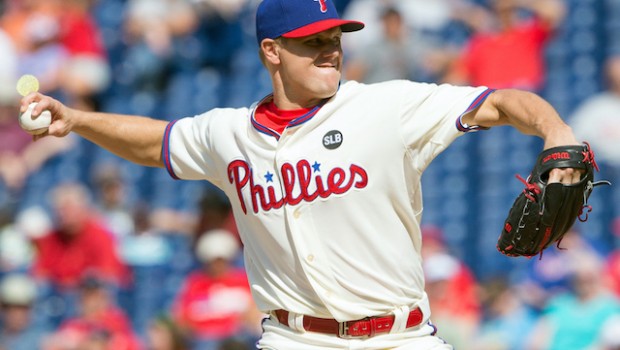 PUTTING PHILLIES TRADE OF PAPELBON INTO SOME PERSPECTIVE

In case you went to bed early last night, Jonathan Papelbon was traded by the Phillies to the Washington Nationals.

And you will probably read and hear a lot of comment about, but let me see if I can put the deal into perspective:

The ZiPS projection system available at FanGraphs tabs Papelbon is for a 3.04 ERA in 23.0 innings over the remainder of 2015.

Given his recent success when it comes to limiting hard contact off the bat, he’s a good bet to outperform those numbers. Papelbon’s coped with modest velocity loss in recent seasons by relying more on his slider and also changing the shape of his slider so as to get more drop. This season, Papelbon’s also seen a big spike in his groundball rate (51.9 percent versus a career mark of 38.9 percent). That’s the kind of indicator that tends to stabilize pretty quickly, so there’s likely something to it. All of this has helped him sustain the dominance even into his thirties.

On the Drew Storen front, ZiPS foresees a 2.79 ERA in 23 innings. While Storen is missing bats with aplomb and has nothing awry with his batting average on balls in play, he’s been quite lucky when it comes to keeping fly balls in the park. Maybe he regresses on that front, and maybe he doesn’t. Either way, the projections see a decline in performance ahead for each of these shutdown right-handers. We’ll see whether that comes to pass.

The 22-year-old Nick Pivetta was a fourth-round choice in 2013 out of a New Mexico junior college. Across parts of three minor-league seasons, the right-hander has pitched to a 3.60 ERA and 2.23 K/BB ratio in 53 games, 50 of which have been starts. He’s a live arm whose secondary offerings need work, but he projects as a useful fourth starter type at the highest level.