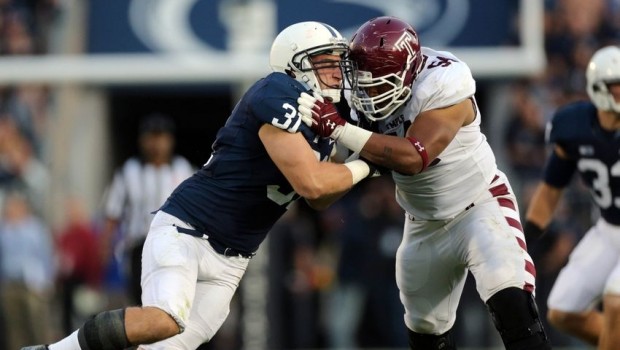 FORGET THE HYPE! CAN OWLS SCORE AGAINST NITS’ DEFENSE?

If you are sticking around Philly this Labor Day weekend and are headed to the Linc Saturday afternoon for the 3:30 Temple-Penn State season opener, you might keep in mind what happened last year.

The final score was a bit deceiving as PSU-Temple was 6-3 Lions midway through the third quarter.

And while many will focus on the PSU run game vs. a Temple defense led by talented linebacker Tyler Matakevich, the Owls’ upset bid likely comes down to whether it can get anything going vs. James Franklin’s athletic defense.

The Owls finished with eight first downs and 248 total yards on 58 snaps. Take away a 75-yard touchdown pass on one third-quarter play, and it’s 173 yards on 57 snaps.

Temple also turned the ball over five times in the 2014 game.

The turnover battle is one area to watch and, for me, so is the battle inside between Penn State defensive tackles Anthony Zettel and Austin Johnson and the interior of the Temple offensive line, which is led by veteran center Kyle Friend, a Cumberland Valley grad.