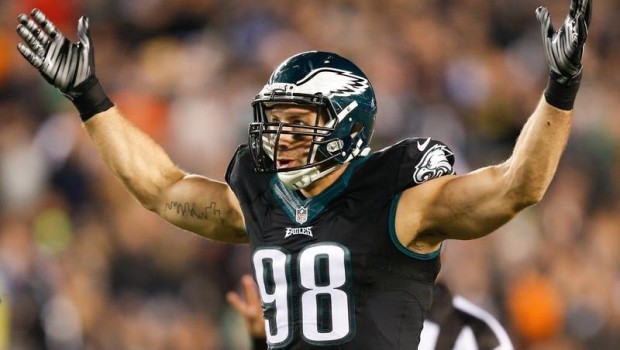 The New York sports media has the reputation of being among the toughest in the nation.

But when it came to the Giants’ 27-7 pounding by the Eagles last night, they more resemble a bunch of pussy cats.

The Giants blew a spectacular opportunity. They could have all but knocked the Eagles out of the divisional race with a win. Instead, they are now looking up at the Eagles, and facing a crucial game Sunday against the Dallas Cowboys at MetLife Stadium.

Here, Eli Manning and the Giants said to the Eagles: “Take the game, it’s yours.”

Bad Comedian Eli Manning and a comedy of errors doomed the Giants, 27-7 losers, Monday night at the Linc.

It had looked so easy at the start. Odell Beckham Jr. and his hamstring were playing, and Beckham caught a 13-yard touchdown pass on the first drive, and Manning completed his first 10 passes, and the Giants were going to separate themselves from the NFC East pack, perch themselves comfortably at the top.

As long as Manning could keep playing at a high level, Sam Bradford couldn’t possibly keep up with him, not even against the depleted Giants’ defense.

“We were rolling,” Larry Donnell said.

And suddenly, without warning, they stopped rolling.

These Giants need Manning to carry them, and when he does not, they are just another 3-3 mediocrity.

Manning hand-delivered one touchdown to the Eagles with a pick-six and brainless plays from Damontre Moore and Nikita Whitlock opened the floodgates to two other Eagles touchdowns.

On a night when Manning threw two interceptions, equaling his season total, these Giants have no chance. Not even against Sad Sam Bradford (three interceptions).

Another Week 6 loss to the Eagles in Philadelphia after a 3-2 start. Will the Giants suffer a fate similar to last year, when they followed up a 27-0 loss with six more defeats in a row on the way to a 6-10 season?

The answer, the Giants insist, is a definitive no.

“I know it sounds crazy, but this is nothing like last year’s game, nothing at all,” guard Justin Pugh said Monday night after the Giants were drubbed again by the Eagles, 27-7. “I still feel very confident in where we’re at and where we’re going. We’re going to learn from this game, for sure. We have to respond better and we have responded when we’ve hit adversity this year. So I feel confident in the direction we’re heading.”

And, it is not like they lost to a star quarterback. Quite the opposite, in fact. Manning had a rough night, getting sacked three times and throwing a pick-six.

But Eagles quarterback Sam Bradford was downright horrific. Despite having a wealth of time to throw, thanks to the Giants’ mostly punchless pass rush, Bradford overthrew receivers, underthrew receivers and was picked off three times. Bradford finished 24-for-38 for 280 yards and a TD to go with the three picks — for a passer rating of 61.3.

At Lincoln Financial Field almost exactly a year ago, a Giants three-game winning streak ended in a humiliating rout, the first of seven consecutive losses that set the stage for the team’s third successive nonplayoff season. Early in Monday’s game, with the Giants again riding a three-game winning streak, they appeared determined to gain some revenge in their return to Philadelphia.

The fast start turned out to be nothing more than a tease. What followed were three first-half Giants turnovers, two pivotal Giants penalties — the team had 12 over all — and the worst performance of the season by the offensive line, ruining the team’s offensive game plan.

The Giants and Eagles combined for seven turnovers and 21 penalties, and throughout the first half, it seemed as if neither team was good enough to actually win. But the Giants made the more painful mistakes, leaving Manning running for his life on a night when he absorbed three sacks, threw as many interceptions (two) as