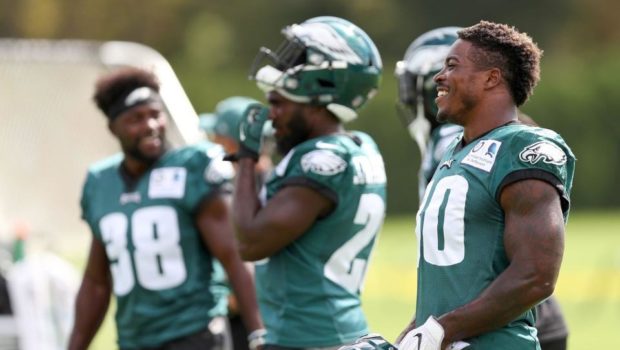 AS A PUNT RECEIVER, EAGLES’ BARNER HAS BIG SHOES OF A LITTLE MAN TO FILL!

So, Kenjon Barner was back at NovaCare yesterday, having been signed by the Eagles as a replacement for Darren Sproles, who is out for the season with two crushing injuries.

And Sproles, his old Philly stablemate, texted him at 5 a.m. Monday morning when Barner was back in his home of Tustin, CA.

“It’s terrible,” Barner told the team’s web site of Sproles’ injury. “That’s my guy … one of the best guys I’ve met in the league.”

Barner was an Eagle from 2014-16, first on the practice squad then on the active roster over the past two seasons when he played in 23 games contributing on both offense and special teams. He views Sproles as a mentor, someone who has shown him the ropes of how to make it in the NFL.

After yesterday’s practice, Barner settled in with a new jersey — No. 34 was no longer available, so he’s now sporting No. 38.

“It makes you hungry because you’re watching guys play, something that you want to be a part of, something that you want to do but you can’t because you’re not there. It makes you drive, push a lot harder and grind for it,” Barner said. “I’m excited to be here. I’m blessed to be here. I’m thankful for the opportunity that I have.”

Barner is here to help fill the void left by Sproles in the punt return game. “Basically he’s done it in real games,” head coach Doug Pederson said. “Just it will be a great opportunity for him, and then the confidence there that he has done that.”

What’s the key to being a punt returner?

“Listen to everything Sproles told me,” Barner said. “That guy has taught me a lot. I just plan to put it to use whenever and if they choose to use me.”

0 thoughts on “AS A PUNT RECEIVER, EAGLES’ BARNER HAS BIG SHOES OF A LITTLE MAN TO FILL!”