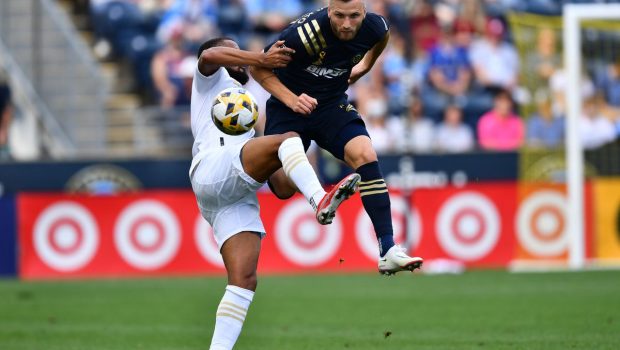 PRZYBYLKO GETS HOT — UNION MOVE INTO 6TH BY BEATING ATLANTA

Kacper Przybylko scored in the 71st minute to lift the Union to a 1-0 victory over visiting Atlanta United FC.

Jose Andres Martinez contributed his second assist of the season to set up Przybylko, who has now scored three goals in his last two games after a seven-match MLS drought.

The Union (10-7-8, 38 points) move above Atlanta (9-8-9, 36 points) after entering the weekend holding the seventh and final Eastern Conference playoff spot.

Brad Guzan had eight saves for the visitors, who entered winners of three in a row and seven of the previous eight.

Atlanta trailed 18-6 in shots and 9-2 in efforts on target while failing to score for just the second time in its last 11 matches.

In truth, neither side looked all that close to breaking through until Martinez made an impressive run inside the penalty area.

After controlling a throw-in from the right sideline, Martinez took the ball toward the endline and beat two defenders on the dribble to round the corner on Atlanta’s defense.

As a third defender approached, he dragged his cross back from the byline toward the charging Przybylko, who hammered a first-time finish low past Guzan.

Union center back Jack Elliott may have come closest to adding another goal with a pair of uncharacteristic opportunities.

He ranged forward and played a slick give-and-go with Sergio Santos in the 62nd minute before hammering a shot into Guzan’s body. Guzan was also there to keep his long-range effort from nestling into the top left corner inside the final moments.

On the other end, it was Jakob Glesenes with a stoppage time clearance to keep a cross from reaching Jackson Conway at the back post. But otherwise Atlanta rarely threatened an equalizer after going behind.