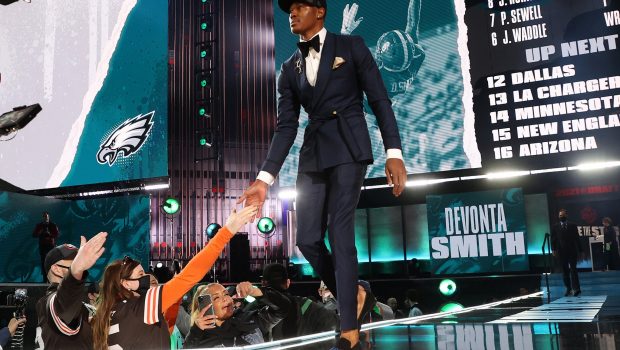 The Eagles had been wheeling and dealing for some time heading into the draft.

Originally set with the sixth overall pick, they traded back to No. 12 in a deal with the Miami Dolphins that picked up an extra first-round pick in 2022.

But the Birds weren’t done there, pulling off a draft-day deal with a division rival to move back up from 12th to 10th on Thursday and select the Heisman winner DeVonta Smith out of Alabama.

It was a well-executed move for a team looking for a pass-catcher.

At No. 6, the Eagles would have missed out on both Kyle Pitts and Ja’Marr Chase, widely considered the top two receiving threats in the 2021 draft class, so Philly elected to trade back and add value for next year.

But then, when Smith was the last of a top-tier of receiving talent left on the board, the Eagles made their move again, jumping over the Giants to take the Heisman winner.