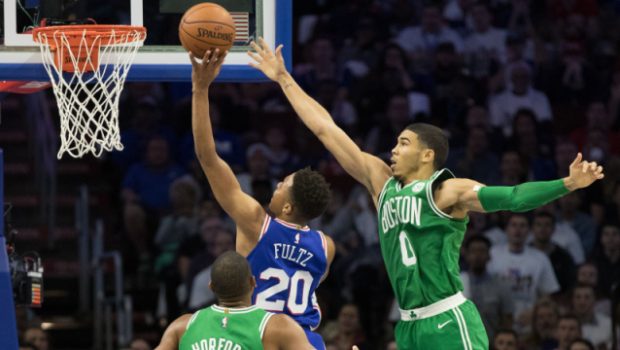 “He’s getting better,” Tatum told The Ringer’s Bill Simmons in an episode of his podcast that aired yesterday. “I’m excited for him because, obviously, he wants to play. He wants to get out there and show people what he can do.”

After getting drafted first overall in the 2017 NBA Draft, Fultz had a disappointing rookie season that was plagued by a shoulder injury and shooting mechanics woes. He played in just 14 games with the 76ers, averaging 7.1 points and 3.1 rebounds in 18.1 minutes on the floor. Fultz’s performance during his limited outings was varied, giving fans everything from air balls to a triple-double.

But 76ers coach Brett Brown said during summer league he has “tremendous optimism and confidence” the 20-year-old is going to have “a hell of a year” this upcoming season. Fultz recently has been working out with skills trainer Drew Hanlen, who also works with Tatum, 76ers center Joel Embiid, and Celtics forward Gordon Hayward.

Tatum said he often sees Fultz at the gym.

“Me and Markelle are really close,” Tatum said. “I see Markelle all the time.”

Fultz was benched for the entirety of the Celtics-76ers playoff series, while Tatum shined and scored 20-plus points in each of the five games.

The contrast in their contributions was highlighted by several NBA analysts and fans during the postseason because the No. 1 overall pick Philly used to draft Fultz originally belonged to Boston. Celtics president of basketball operations Danny Ainge had traded the selection to Philly in exchange for the No. 3 overall pick, which the team used to draft Tatum, and a future first-rounder.