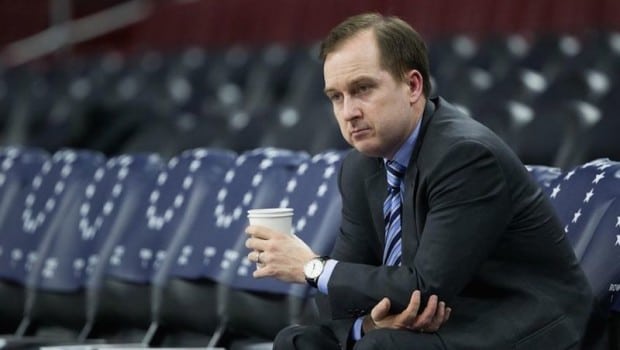 PROCESS THIS! EX-SIXER BIG BOSS HINKIE COULD BE RUNNING KINGS!

The Sacramento Kings have expressed exploratory interest in former Sixers general manager Sam Hinkie, according to league sources as reported by ESPN.

Sources say Hinkie has long intrigued Ranadive, whose franchise has been thrust into a rebuilding mode not unlike Philly’s status under Hinkie in the wake of trading DeMarcus Cousins to New Orleans.

Neither Hinkie’s level of interest in a position with Sacramento, nor the sort of role Ranadive envisions for Hinkie in a front office currently run by popular former Kings player Vlade Divac, was immediately known.

On Monday night, the Kings said they are not in the process of hiring Hinkie.

“The Kings are not hiring Sam Hinkie and have no plans to bring anyone in above Vlade,” the team said in a statement.

Sources say other undisclosed teams have also sought permission to speak to Hinkie, which is presently required based on the terms of the non-compete clause that took effect when he left Philly in April 2016 and expires at the end of this season.