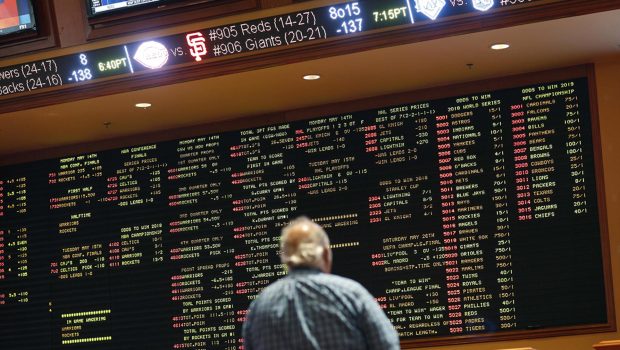 PRO SPORTS LEAGUES PLOTTING FOR A PIECE OF BETTING ACTION!

America’s major professional sports leagues are split on how to get a piece of the action from legal sports betting.

But they are back in the game this year with several state legislatures considering granting them fees from sports bets.

The National Football League, Major League Baseball, National Basketball Association and the National Hockey League uniformly fought to stop the spread of sports gambling for years, but retrenched in their positions after a key loss — a U.S. Supreme Court ruling last year that granted New Jersey and other states the option to allow wagering.

That shift from the courts to statehouses, Congress and the open market has revealed divisions among the leagues in how to approach the inevitability of expanded legal betting.

Some are lobbying individual states to include a 0.25 percent cut of all sports bets placed in their states. Others are concentrating on making free-market deals with individual gambling companies. Some are doing both those things and others say they don’t want or need payments from sportsbooks.

The U.S. Supreme Court ruled last May that all states are free to legalize sports betting. Eight states currently accept bets with many more expected to follow suit — some soon, others in future years. None of the laws passed in 2018 gave leagues what they’d hoped for.

But at least six states have included fees for the leagues in sports betting bills they are considering this year, with more bills expected.

The NBA, MLB and golf’s PGA Tour began lobbying individual states for direct payments, an idea widely known among legislators and lobbyists as an “integrity fee” but that the leagues prefer to call a royalty. The leagues say they deserve to be reimbursed for costs to make sure their games are free from scandal and manipulation. They also feel that outside companies making money from games should share profits with those organizing the sports.

“It obviously helps the leagues in providing compensation to us for our product,” said Bryan Seeley, a senior vice president of Major League Baseball. “It also helps defray the costs for us for integrity and regulatory costs.”

Those costs include hiring additional people to monitor games and betting activity, training players, referees and other league employees on integrity measures, developing special software and hiring outside consultants, said Dan Spillane, an NBA senior vice president. But neither of those leagues would quantify exactly how much integrity measures are costing them or how much is new spending, given that illegal sports betting has been popular in America for a long time and other countries offer legal wagering on their games.

Seeley said gambling companies need to partner with leagues so both sides have incentives to grow appeal and profitability, he said.

“I can’t think of another industry where a class of people is able to make hundreds of millions of dollars off someone else’s product, put risk on that party, and pay them nothing,” Seeley said. “Some of the revenue that’s going to be made by the gambling companies needs to be shared.”

The NFL — even with the most popular betting sport in the United States — says it never sought such payments.

“Rather, we are focused on game integrity and consumer protection,” NFL spokesman Brian McCarthy said.

The National Hockey League has put most of its energy into reaching direct deals with gambling companies, including gambling giant MGM Resorts International, one of a flurry of deals the leagues made last year. These pacts have included sportsbooks licensing official league data as well as using league and team logos in marketing and advertising.

“Instead of seeking legislation at the federal level or even at the state level, our approach has been to work directly with the industry,” NHL Commissioner Gary Bettman said. “We believe that, whether it’s our intellectual property, our data, whether it’s video of our game, we have important assets, and if somebody is going to avail themselves or want to avail themselves of those assets in order to conduct their business, then we’re going to need to have a negotiation.”

MLB and the NBA say they are pursuing state-by-state fees and deals with private companies as parallel but independent efforts. David Schwartz, director of the Center for Gaming Research at the University of Nevada-Las Vegas, sees that as “an adjustment by the leagues to the political reality of the situation.”

“I imagine that as the market grows, they will seek various ways to monetize public interest in sports betting, perhaps even some they haven’t thought of yet,” Schwartz said.

At least five states considered royalties to leagues last year before deciding against paying them. The leagues think they’ll do better this year with more lobbying. So far this year, Missouri, New York, Kansas, Illinois, Iowa and Massachusetts have introduced bills providing fees of between 0.2 percent and 1 percent for the leagues.

That doesn’t necessarily mean there’s strong support for the fees in those states. Lawmakers in several of those jurisdictions say they included the fee in bills for the purposes of discussion, but say they’re not convinced it should be adopted.

New York state Sen. Joseph Addabbo Jr. said the bill he sponsored is basically a reintroduction of last year’s unsuccessful bill. He’s not sold on the 0.2 percent fee it would provide to the leagues, noting that Nevada, where sports betting has been legal for years, does not share its revenue with the leagues.

“Somebody is going to have to justify an integrity fee, credibly,” he said. “The leagues say there’s more work involved in ensuring the integrity of their games; I get it. But I need to maximize the funding for our state. There’s a pie, and everyone wants their little slice. And the state wants the biggest slice.”

Iowa state Rep. Bobby Kaufmann included a 0.25 percent fee in one of his state’s bills because, “I wanted to give every one of the stakeholders — the casinos, the leagues, the lottery and the horsemen — their ‘dream bill.’ But I don’t believe right now (the fee) has the votes.

“Iowa doesn’t have any pro sports leagues, but our casinos are in 19 different locations,” he said. “An integrity fee would just direct money away from Iowa to out-of-state entities.”

Missouri state Sen. Paul Wieland opposes such fees, which are in one of his state’s bills.

“I don’t think that the leagues have any rights to fees,” he said. “The leagues are in the sports and entertainment business, and the casinos are in the gaming business. If the leagues feel they should get something, they should work out individual deals with casinos to be the ‘official sports book of,’ just like beer companies do.”

Illinois state Rep. Mike Zalewski won’t commit to supporting an integrity fee, but is sympathetic to the position of the leagues.

“It’s their product,” Zalewski said. “They want to have a say in this.”

One thing the leagues have agreed on with one another is the idea of federal regulation, preferring a single set of uniform rules than different laws in each state. A bill introduced late last year that would have the U.S. Justice Department set minimum standards for states to meet in offering sports betting does not include royalties. But it does not explicitly forbid them, either, and whether such payments are ultimately added is expected to be a central focus or negotiations as it makes its way through Congress.