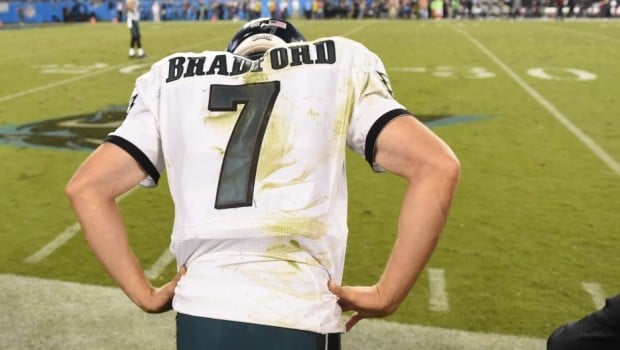 Here’s how Pro Football Focus graded out the Eagles in their 27-16 loss to the Carolina Panthers Sunday night:

Celek and Barbre both graded out well as run blockers. This was Celek’s best grade of the season. Barbre has earned a positive grade in three straight weeks now.

Bradford’s stats didn’t look pretty. He finished with 26 completions on 46 attempts for 205 yards (4.5 yards per attempt), zero touchdowns, one interception, and a 58.7 rating. But PFF isn’t putting all the blame on Bradford. He dealt with a whopping eight drops. He was also sacked five times. PFF writer Neil Hornsby wrote a separate article about whyBradford isn’t to blame for Philadelphia’s loss to Carolina:

“It’d be unfair to blame the loss on Bradford. In fact, he played well. It was the players around him who didn’t measure up. The Eagles’ replacements at left tackle for the injure Jason Peters allowed 13 total pressures between them, meaning Bradford had opposing pass-rushers in his face all night. He also got little help from his receivers. Philly had the highest drop rate in the league for Week 7, with 20 percent of Bradford’s incompletions being drops. He had another six that were either batted down or thrown away, and his interception was more of a fluke than anything else. In fact, Bradford ranked tied for seventh this week with an accuracy percentage of 85. And in our PFF grades, he tied for third with Derek Carr, behind onlyTom Brady and Jameis Winston.”

Bradford doesn’t elevate the team around him. The same problem happened in St. Louis, which is why they got rid of him. He’s not a franchise quarterback if you constantly have to make excuses for him.

Dennis Kelly came in to play right guard and really struggled in pass protection. He allowed five hurries and one hit on Bradford. Tobin also struggled in pass protection. He allowed three sacks and four hurries. To Tobin’s defense, a few of those sacks came late in the game when the Eagles were in an obvious desperate passing situation. Still, not great.

It’s no surprise to see Matthews finished with a negative grade. He was targeted six times for a mere three receptions for 14 yards. He dropped two passes. Matthews has only played one game this season (Week 3) where he hasn’t earned a negative grade.

Fellow second-year receiver Huff also struggled. He dropped a touchdown pass. Despite playing 69 snaps, he was only targeted four times. He gained a mere five yards on two receptions.

Murray dropped two passes as a receiver and only averaged 3.6 yards per carry.

Graham made an impact as a pass rusher. He had two hurries and he also forced at least one holding penalty on the Panthers.

Thornton graded out well in run defense with five tackles and four stops.

Hurry only played nine pass rush snaps but he had three hurries. He also drew a holding penalty.

Maxwell had a big interception on a tipped pass. He also had an AWFUL tackling “attempt” that allowed Mike Tolbert to score a touchdown. Maxwell finished with seven tackles.

Jenkins had a big interception right before the end of the first half.

Lots of bad grades here. Where to begin?

Barwin only managed to get one pressure in 19 pass rush snaps. He also graded poorly in run defense.

Hicks and Kendricks struggled in run defense with a missed tackle for each.

Hart graded poorly in run defense and also committed four (!) penalties. Two of them were declined or off-setting.

Logan and Cox combined for four penalties with two each. Logan’s encroachment penalties on consecutive plays near the goal-line had to be very frustrating for the team. Cox graded poorly in run defense.

Carroll and Smith also graded poorly in run defense. It looked like Smith got caught out of position on the play where Carolina picked up 43 yards on a reverse by Ted Ginn Jr.