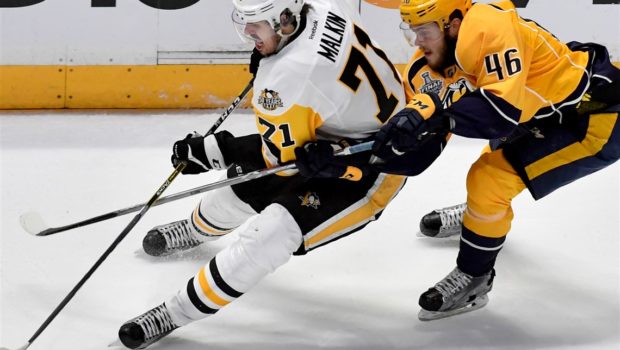 The Nashville Predators’ 5-1 win over the Penguins in game 3 of the Stanley Cup finals was an exclamation point on the home-standing Preds’ cred:

“It’s a seven-game series,” Penguins coach Mike Sullivan said. “It’s a long series. We knew this was going to be a hard-fought battle. That’s exactly what it is.

“We’ve got to try and respond the right way.”

The Predators had won seven of eight games at Bridgestone Arena in these playoffs. They swept the Chicago Blackhawks and beat the St. Louis Blues and Anaheim Ducks in six games to get here, locking down those teams’ respective stars en route to victory.

Back home in front of their hockey-mad fans, a city that has been whipped into a frenzy, the Predators turned this thing into a series again with a superb performance.

Game 4 is back at Bridgestone on Monday.

“They were the more desperate team,” captain Sidney Crosby said. “That was pretty evident. We’ve got to find a way to raise that level of desperation and be better all over the ice.”

Start with the power play. It went 0 for 3 Saturday and managed just one shot on Predators goaltender Pekka Rinne, who stopped 27 of 28 in a bounce-back effort.

Instead of using a collection of highly skilled players to gain momentum, the Penguins are losing it when this group takes the ice.

“It’s not working,” Evgeni Malkin said. “We need to change something, maybe players, I don’t know. It’s tough to say right now. I know we can play better on the power play.”

“I didn’t have room,” Malkin said. I have the puck for one second, and they jump to me.”

Crosby talked about the same stuff. It was a combined of missing the net and Predators shot blocks. Sullivan said postgame the Penguins are still trying to get Kessel to have more of a shoot-first attitude, and there’s increasing speculation that he’s not exactly healthy.

“They got some momentum when they got that power play goal,” Crosby said of Roman Josi’s score at 5:51 of the second period.

Playing from behind, the Penguins were also forced to take a bunch of chances and, as a result, coughed up a few odd-man rushes.

The most obvious might have been a neutral-zone turnover by Chris Kunitz in the third period that led to a breakaway goal for Craig Smith. Not all Kunitz’s fault. The puck hit Kessel’s skate. But it still resulted in a chance the other way.

Whether it was poor puck-management or Nashville simply being opportunistic, the Penguins will want to make smarter decisions in the neutral zone for Game 4.

The Predators seemed to target Matt Murray’s glove hand and scored three times that way. Murray said afterward he was happy with his positioning on the goals; it simply came down to making the save.

“I thought I was in the right spot on almost all of them,” Murray said. “A couple weird bounces. The breakaway, maybe I thought I could have made a better play on it. Other than that, I was pretty happy with my positioning. It’s just about making a save.”

One good element for the Penguins was play of Carl Hagelin, Matt Cullen and Patric Hornqvist. They strung together several solid shifts early, but the group was unable to beat Rinne.

Things got heated late, too, as Matt Irwin shoved Cullen from behind, a development that could easily reappear in Game 4.

Jake Guentzel scored the Penguins’ first goal, his 13th of the season. He’s now one shy of Dino Ciccarelli’s rookie record set back in 1980-81.

Save that for another day, however. The Penguins were beaten by a team Saturday that simply wanted it more.

While that hasn’t happened a ton under Sullivan – it’s the first time they’ve suffered back-to-back road losses in the postseason on his watch – it’s not exactly revolutionary for the opposing team to have a bounce-back game at home.

Its players get paid, too.

“They were hungrier,” Malkin said. “We played [well] the first period, then we gave them so much space; they controlled the puck. We lost control after first period. We took a couple penalties and gave them a couple breakaways. It’s not our game.

“We need to forget that, look forward and look to next game.”