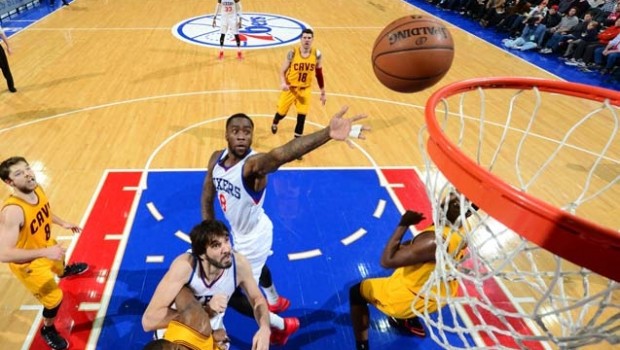 AS WE PREDICTED, SIXERS KNOCK OFF CAVS 95-92 FOR FIRST WELLS WIN

I hope you weren’t surprised that the Sixers won their first home game of the season Monday night, catching the Cleveland Cavaliers without LeBron James, Kyrie Irving and Dion Waiters, to rally for a 95-92 victory. Tony Wroten (photos above and left) scored 20 points and hit the go-ahead layup with 9.1 seconds left to lift the Sixers to their first win at Wells Fargo Center after 14 losses.

Kevin Love had 28 points and 19 rebounds for the Cavaliers, who didn’t have James and Irving with them on the trip because of injuries. They lost Waiters and two reserves shortly before tipoff because of a trade.

The Cavaliers will acquire guards J.R. Smith and Iman Shumpert from the New York Knicks in a three-team trade that also includes the Oklahoma City Thunder.

James missed his fifth straight game due to a strained knee and back and could be sidelined another week. Irving sat out with a bad back, and the Cavs have already lost starting center Anderson Varejao for the season due to an Achilles injury.

Wroten made one of two free throws, then knifed his way through the lane for the go-ahead layup with 9.1 seconds left for a 93-92 lead. That helped the Sixers end their 14-game, home-losing streak.

“We had it under control, we just didn’t bury them,” Love said. “We felt this was a team we should have beat.”

Michael Carter-Williams had 18 points and 13 assists for the Sixers after he missed one game because of right shoulder soreness. Carter-Williams buried a jumper with 4:45 left to pull the Sixers to 86-80 and got a rise out of the crowd of 17,771.

The Sixers had one of their largest crowds as fans expected James to dazzle in his only appearance this season in Philly.

“We could see how electric it was and a hostile environment,” Wroten said.

Wroten, who missed all six 3-point attempts, was clutch in the paint in the fourth. His driving layup made it 88-86, and he tied the game on the next possession. The Cavs faded in the second half, missing 11 straight shots spanning the third and fourth quarters, one day after playing Dallas.

“We knew in the third and fourth quarters they would be a little bit tired, and we really tried to use that to our advantage,” Carter-Williams said. “We tried to get out and run.”