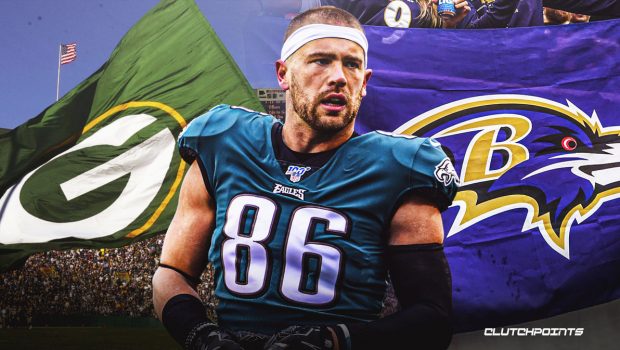 Before the Eagles recently placed tight end Zach Ertz on injured reserve with a high-ankle sprain he was on the radar of both the Green Bay Packers and the Baltimore Ravens.

Per Ed Kracz of SI:

Interest in Eagles tight end Zach Ertz was percolating, and a source indicated that at least two teams, the Green Bay Packers and Baltimore Ravens, made offers right before he was placed on Injured Reserve on Oct. 22.

The report also points out, however, that interest in Ertz dropped immediately after he injured his ankle:

A trade of Ertz doesn’t seem likely now before the Nov. 3 trade deadline with him expected to be out with a high ankle sprain until at least mid-November, if not longer.

Richard Rodgers started in place of Ertz in the Eagles’ Week 7 win over the New York Giants, and he caught 6-of-8 targets for an 85-yard gain, which is actually 15 yards more than Ertz’s best effort this season. Star QB Carson Wentz seems very comfortable targeting Rodgers, and the 28-year-old will have a few more games to prove his worth for Philly with Ertz watching from the sidelines.