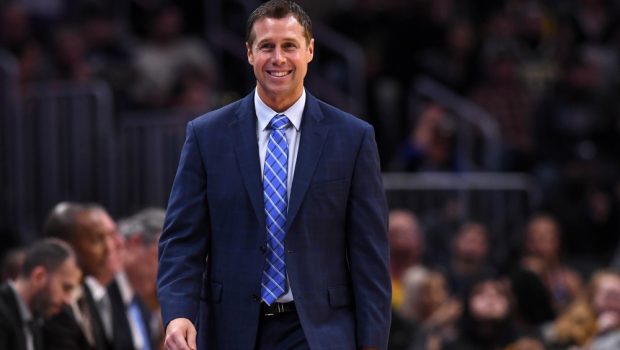 PRAYERS FOR SIXERS ASSISTANT DAVE JOERGER AS HE BATTLES CANCER

Sixers top assistant coach Dave Joerger is leaving the team for several weeks to undergo chemotherapy and radiation treatments for a form of “head and neck” cancer.

Joerger, 47, has undergone treatments while coaching for the past two weeks — missing only one road game — but the Sixers’ extended road trip requires him to step away and stay back for treatments in Philly, he told ESPN.

Joerger told the Sixers players, assistant coaches and staff of his cancer in a postgame meeting after last night’s loss to the Pacers in Indiana. He had already told a small group of Sixers officials — including coach Doc Rivers, president of basketball operations Daryl Morey and owner Josh Harris — of his recent diagnoses.

“Dave is not only one of the most talented and respected coaches in the NBA, but he’s a great friend, colleague, husband and father,” Rivers said in a statement. “The same positivity, enthusiasm and grit that have made him a successful coach will also carry him through his fight against cancer.”

Joerger, who says he has Stage 1 cancer, described his prognosis prior to Saturday’s game on ESPN’s The Woj Pod podcast.

“We have caught it early,” Joerger told ESPN. “I’m very lucky. I’ve got over a 90% chance of cure rate, but it’s very scary and it’s not enjoyable going through. …I can’t go on the road and do radiation and chemotherapy in different cities around the country. To continue my treatment, I need to step away from the team.”

Joerger noticed a lump in his throat approximately 15 months ago and alerted his Memphis-based physician. After a scan returned negative, he kept monitoring the lump and worried that it wasn’t getting smaller. Five weeks ago, he called his doctor with renewed concerns.