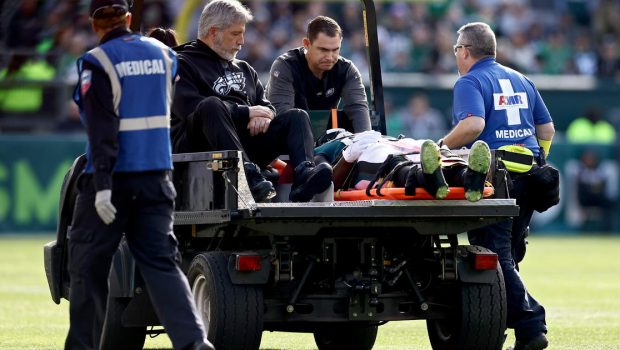 PRAY FOR EAGLES JOSH SWEAT: ‘I’LL BE BACK THIS SEASON’!

Shortly after the injury, the Eagles announced that Sweat has been transported to a local hospital for precautionary reasons, but had movement in all his extremities.

“It’s always hard when a guy goes down and you see him go down at first and you don’t see him move,” defensive tackle Fletcher Cox said after the game.

“He’s probably feeling better now but at the time I think the training staff did a really good job of making sure that they kept him in place and making sure nothing was really wrong with him. He was smiling, so he was in good spirits. I’m sure some of the guys, maybe a lot of guys, are going to check on him, see how he’s doing.”

Thank you for your prayers and support 🙏🏾 I’ll be back this season! #GoBirds