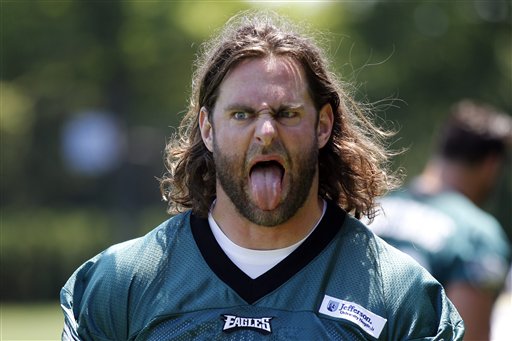 AFTER PRACTICING, EAGLES’ MATHIS IS FEELING NO PAIN

The conventional wisdom about the Eagles has been that their offensive struggles, especially compared to last season’s juggernaut, are attributable to injuries to three of five offensive line starters.

For once the CW is right for a change, and that is changing.

Eagles guard Evan Mathis practiced Wednesday for the first time since before the season opener against Jacksonville, in which he suffered an MCL sprain.

“Even warmups. Full speed, running and it felt great. Hitting comes after that and it was awesome.”

Even though Mathis says he feels physically ready to return to action, that will have to wait. Under the NFL’s injured reserve/designated to return list it stipulates that an injured player is eligible to return to practice after six weeks but cannot return until eight weeks passes.

“It would probably be pushing it to come back this early,” Mathis said. “If it weren’t for this designation, if it was a playoff game, or if there was something on the line then I would probably do it.

“At this rate, I’d probably be ready to go next week. It pretty much lines up with the IR timeline to return.”

Since Mathis was injured in the season opener, he is eligible to return November 10 against the Carolina Panthers.

While he can’t yet play on Sundays, Mathis says that he values the time around his teammates to practice and prepare over the next three weeks.

“In the mean time I’m going to work very hard, get my lungs up to game shape and make sure that I’m ready to go.” Mathis said. “I expect myself to be a spring chicken. Usually at this point in the year I feel good, but have some normal aches and pain. My knee doesn’t even hurt right now.