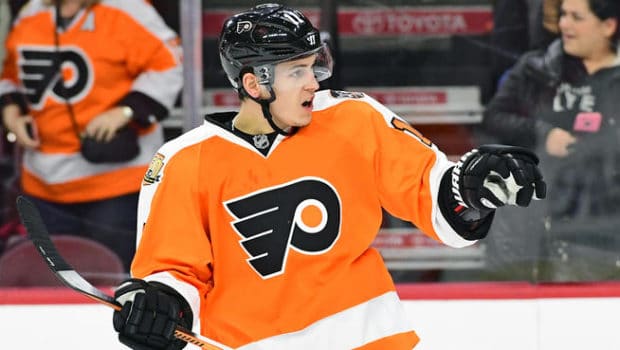 The Flyers finished last night’s loss to Columbus 1 for 8 on the power play — they are just 1 for 26 in their last six games.

Travis Konecny (above) took a lot of the blame for the setback, even though he had one of his best games of the season.

“I kind of let the game get to me,” Konecny said. “I was in the mix a lot tonight and for whatever reason, I decided to bump the guy on the way back to the bench.

“It’s a stupid penalty and to be honest, I put the game in my hands there. It’s unacceptable.”

“It could have been a lot different story if the power play had buckled down,” Brayden Schenn said. “It’s not good enough and we know that.

“Teams are adjusting and we have to do a better job coming up with different plays. It might be a little stationary right now, We might have to get a little more puck movement and player movement. Hopefully that open up some lanes for guys to shoot at. It’s frustrating.”

With the Flyers down 2-0, Konecny (who just turned 20 on Saturday) started a comeback with a goal at 14:10 of the first period.

In the second period, Konecny scored his second goal and nearly had a third.

After Schenn’s NHL-leading 15th power-play goal at 4:23 that tied the score, Konecny scored again at 11:03.

Later, Konecny put a third shot into the net but that was negated because the Columbus net was moved due to a collision between Jake Voracek and the Blue Jackets’ Zach Werenski.

The key to the Flyers’ comeback was not getting down after falling behind.

“We kind of got deflated for a second,’’ Konecny said, “but then the older guys spoke up and kind of got us back going and on the right track and then put ourselves in a good opportunity here going into the second period.”

Another element of the resurgence was getting traffic in front of Bobrovsky.

“The opportunities were there,’’ Konecny said of the first period. “We have to get into his (Bobrovsky’s) eyes, that’s what we preached before the game. If he sees the puck he is more than likely going to stop it. We just have to keep getting the puck to the net. I know it sounds cliché but that’s what you have to do in games like this.”

Gagner put a shot home after a pass from Boone Jenner from below the goal line deflected off Steve Mason’s stick and right into the slot at 7:42.

Atkinson, who leads Columbus in scoring, notched his 31st goal at 8:42 when Radko Gudas lost his balance and was only able to push a weak shot into the Columbus zone. That allowed Werenski to spring Atkinson on a breakaway with not a Flyer in sight.

The goal occurred on a delayed penalty call, and it was the sixth time this season the Flyers have been scored on in a six-on-five situation, which is tops in the NHL.

Konecny cut into the lead with his first goal.

“Honestly, I was looking to pass it,’’ Konecny said. “I knew there was a guy coming in so I looked to my right side and I don’t think he was expecting the shot when I let it go.”