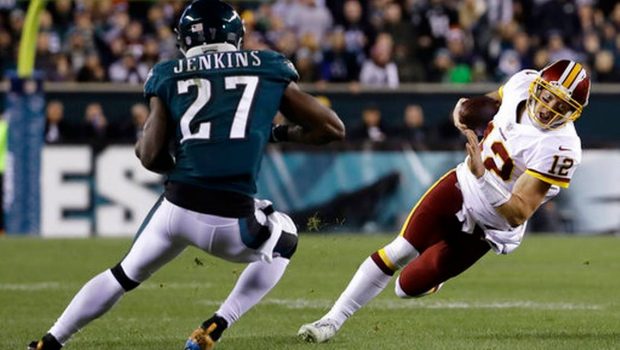 The Eagles and their Nation aren’t kidding themselves.

Last night’s 28-13 victory over the depleted Redskins preserved the Eagles’ title defense but did little to quell those uncomfortable thoughts nagging at the city.

The Redskins lost their quarterback and both starting guards, and yet the Eagles could not put away a team quarterbacked by Mark Sanchez until midway through the fourth quarter. They won, and so their season stayed alive.

They showed promising signs, but proof they are a caliber of team capable of repeating never materialized.

“We’re a long way from that,” Eagles right tackle Lane Johnson said. “I promise you.”

The Eagles won consecutive games for the first time all season, but their locker room was more subdued than celebratory. It contains enough champions for them to understand victories over the New York Giants and quarterback-starved Redskins do not mean they have turned any kind of corner.

Those victories, which came on the heels of an embarrassing, 48-7 shellacking in New Orleans, only nudged them to 6-6, still in the thick of the NFC wild card picture and one game behind the Dallas Cowboys, whom they’ll face Sunday in Dallas in a season-shaping showdown, in the NFC East race. The magnitude of the looming game mattered more to the Eagles than the minor achievement of consecutive wins.

“We’ll see after this week,” safety Malcolm Jenkins (above) said. “We understand where we are as far as the season. While we were excited about putting two wins together, if we don’t take care of business this week, it’s all for naught.”