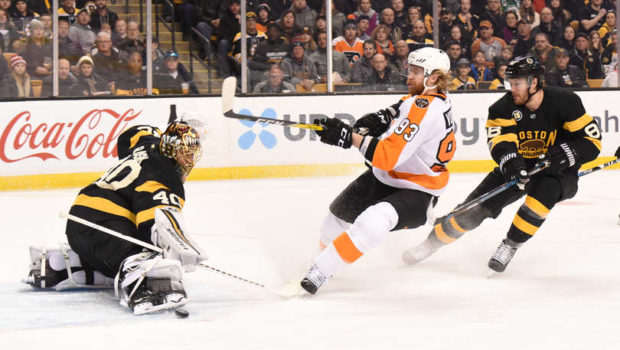 POINTLESS! FADING FLYERS COUGH IT UP TO BRUINS 2-1!

The Flyers’ playoffs hopes are on life support, and yesterday’s choke against the Boston Bruins sure didn’t help.

“Ninety-nine out of 100 it’s not going to go in,” Boston’s Drew Stafford said of his dump-in shot that went into the net with 5.6 seconds left after it tipped off Flyer defenseman Brandon Manning’s stick, giving the Bruins a 2-1 win.

David Pastrnak had a power-play goal, and Tuukka Rask made 26 saves for Boston, which improved to 10-3 under interim coach Bruce Cassidy, who replaced fired Claude Julien on Feb. 7.

“Hey, you never know,” Cassidy said. “You never know, throwing it at the net. It’s lucky. We all know that. A heartbreaker for Philly and a benefit for us.”

Jordan Weal had the Flyers’ goal, and Steve Mason stopped 25 shots. Philly may be sliding out of a chance at a playoff berth with its ninth loss in 14 games (5-8-1).

Stafford had the puck along the right boards, spun around and just shot a seemingly harmless attempt at the net. Manning skated in front and it slipped past Mason after hitting his stick. The defenseman put his hand to his helmet in disbelief.

Manning said it was just his instinct to attempt to block the shot.

“That’s just the way hockey is or sport or whatever,” he said. “Unfortunately it was a big moment, big time of our season right now. It’s tough right now, but you’re moving away from it, I guess.”

When asked if he wished he would have done anything differently, he said: “What do you think? It’s the game-winning goal and biggest time of the year.”

Trailing 1-0 early in the second, the Flyers tied it when Weal scored out of a scramble. The score stood after a challenge by the Bruins, who felt the Flyers were offside.

Philly controlled play for lengthy stretches in the second, holding the Bruins to four shots on goal. Many times during the game, chants of “Let’s Go Flyers!” could be heard echoing around the balcony seats.

Boston led 1-0 after a first period that featured solid end-to-end play, a couple of break-ins for good scoring chances, a long Flyers’ two-man advantage and a fight that saw Boston’s Matt Beleskey send Manning to the ice with a right-handed punch.

Pastrnak’s one-timed Patrice Bergeron’s pass by Mason for his 28th goal, making it 1-0 with 1:22 left in the period.

Rask made a splendid right-skate stop on Jakub Voracek (above), who collected a pass and broke in alone when the Bruins were caught on a line change midway into the period. Mason dropped to stop Pastrnak’s close bid a few minutes later.

The Flyers had seven shots on goal during the power plays that lasted 1 minute, 43 seconds — the best was Wayne Simmonds’ rebound from the edge of the crease that Rask made a pad save on.