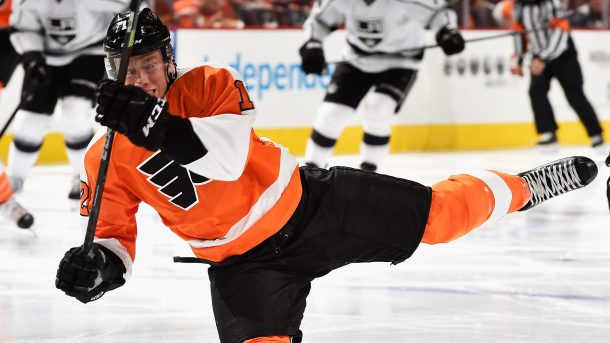 POINTLESS IN 41 GAMES! WILL FLYER MICHAEL RAFFL EVER SCORE AGAIN?

The Flyers’ inability to score is endemic of their mediocrity.

If you can’t score the puck, all the noise about youth and energy don;t really amount to anything.

And no one has amounted to less than Mike Raffl:

He has now gone 41 games without a point dating back to last season!

“It’s like you forget how it feels to be in that (scoring situation),” Raffl told Courier-Post online. “It sucks. I don’t know. I don’t know. Get one, get 20. You never know.

“I know I will never be a guy that ends up with 80 points or something. I’m well aware of that. It still would be nice to get one. If we win the rest of all the games I’d easily go without scoring without having a problem with it.”

Raffl isn’t alone. Wayne Simmonds had a hat trick on opening night and notched nine points in his first eight games. He’s had three points in the dozen games since.

“I am getting chances. I’m just not scoring,” Simmonds said.

“I feel like I’ve started to play better,” he said. “Things haven’t been coming offensively for me, but I think as an individual I’ve got to keep working hard. The only way to work your way out of a bad streak is to work hard and hopefully things eventually start going your way.”

“It gets to your head. It gets frustrating,” said Sean Couturier, who has 15 points in his last 12 games and might hit a new career high in goals (he’s three away) before the calendar hits December. “When you’re getting chances, that’s when you know it’s coming. Usually it’s just a matter of time before you get one lucky one, one ugly one that you probably don’t deserve and then things just come easier after that.”