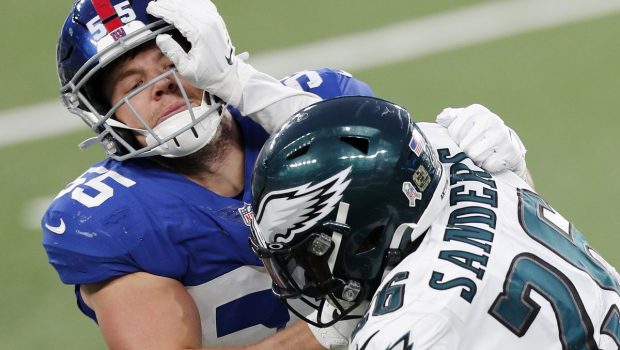 There is a reason the Eagles are a 10-point home fave tomorrow against the Giants at the Linc.

The Birds are 7-7 and driving for a wild card playoff spot.

The Giants are 4-10 and basically toast.

Not of the town!

TURNOVER DIFFERENTIAL: Giants minus-1, Eagles minus-2.

GIANTS PLAYER TO WATCH: QB Jake Fromm. The second-year pro, who was signed after Daniel Jones was hurt in the last game against the Eagles, finally made his NFL debut last weekend. The Georgia product played the team’s last series and hit 6 of 12 passes for 82 yards. He’s likely to see action with veteran backup Mike Glennon struggling.

EAGLES PLAYER TO WATCH: TE Dallas Goedert has 13 catches for 240 yards over his past two games. He has become a focal point in the passing game since the Eagles traded Zach Ertz to Arizona. Goedert was held to one catch for no yards in the first Eagles-Giants meeting.

KEY MATCHUP: Philadelphia offensive line vs. New York defensive line in the run game. The Eagles ran for 208 yards in the first meeting, but turned over the ball four times and lost.