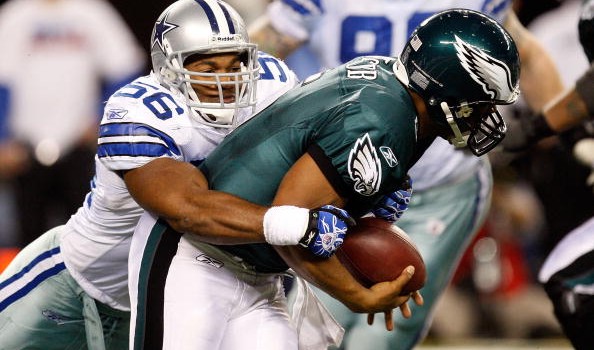 MC NABB, WHO LIVES IN A GLASS HOUSE, THROWS STONES AT ROMO, CUTLER

In his last game in an Eagles’ uniform, McNabb’s line was 19-for-37, 230 yards, 6.2 yards per completion, one TD, one pick, four sacks for 22 yards. Cowboys beat the Eagles 34-14 and McNabb was traded three months later to the Redskins.

It’s hard to know who to feel more pity for — Donovan McNabb, the thin-skinned, passive aggressive former Eagles QB turned analyst; or Fox Sports1, which employs him and should ask for a refund on his contract.

McNabb was on a talk show in his hometown of Chicago, and he went off on Jay Cutler, the Bears QB, for being the “Tony Romo of the Midwest” and that playoff wins are the true measure of an NFL QB.

This from a guy who never won the Big Game for the Eagles, losing four NFC title games and choked, literally and figuratively, in the 2005 Super Bowl against the Patriots in which he threw three interceptions.

And this from a guy whose last game in an Eagles uniform was a 2010 playoff game in which he bizarrely was caught on camera playing an air guitar before the game and then got outdueled by the same Romo he is denigrating!

“He’s the Tony Romo of the Midwest,” McNabb said during an interview with 87.7-FM in Chicago, via the Chicago Sun-Times. “We can talk about arm talent, we can talk about being able to throw a ball through a wall. He can put up 280, 340 yards passing, but you look across the board he’s got two interceptions in a game that cost them 14 points or so. That hurts a football team.”

Cutler has thrown two interceptions in each of Chicago’s three losses this season and zero in each of the Bears’ three wins.

Back to that playoff thing though, McNabb says that playoff wins are the ‘end-all be-all’ for an NFL quarterback and that’s why Cutler is the Midwest Romo.

“Can he play in this league? Absolutely, he’s proven that,” McNabb said. “But a quarterback is measured by your body of work, meaning your wins and losses record, the numbers you put up. And the end-all be-all is how many playoff wins do you have? How many playoff appearances do you have? If you only have one to show for almost a decade of play that means you can’t lead your team to the playoffs.”

Cutler has only been to the playoffs two times in nine seasons and McNabb says that maybe Cutler’s the problem.

“The question is why [can’t you lead your team to the playoffs]? Because you’re so talented, the potential is there, but why haven’t you been able to do it? You can only say for so long that it’s been the talent,” McNabb said. “They have some talent around Cutler, that’s never been the issue. Now can you put it all together? To be honest, the answer is no.”