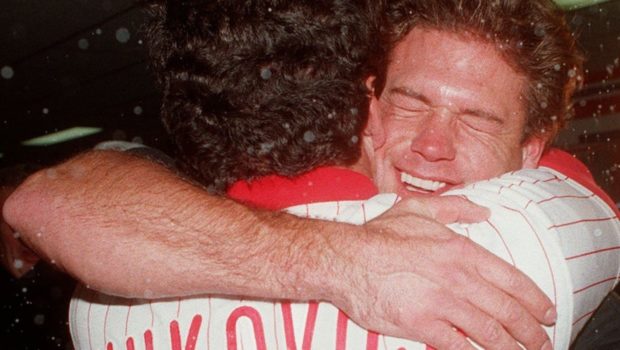 DID PLAYING AT THE VET CAUSE OR CONTRIBUTE TO DAULTON’S CANCER?

The Phillies just honored Darren Daulton, Dallas Green and Jim Bunning for their great play this past weekend in a year when they all died.

And now the New York Times’ Jere Longman has taken a hard look at the brain cancer, glioblastoma, that killed Daulton and explored whether Veterans Stadium, where the Phils played from 1971 to 2003, may have contributed to Dutch’s death and also other Phillies players who played there:

Other former Phillies who reportedly died of glioblastoma since 2003 were reliever Tug McGraw at age 59, infielder John Vukovich at 59 and catcher Johnny Oates at 58. Ken Brett, a pitcher who played in Veterans Stadium for one season, died at 55 of a brain cancer that has been identified in some news accounts as glioblastoma.

“There is almost never an explanation for them,” said Timothy R. Rebbeck, a cancer epidemiologist at Harvard and the Dana-Farber Cancer Institute who has studied the Phillies cases.

“I’m concerned about it,” Larry Bowa, the Phillies’ bench coach, who joined the team as a player in 1970, told Longman.

Larry Andersen, who pitched for the Phils in the 1983 and 1993 World Series and is now a radio commentator for the team, said: “You can’t help but think about it. It would be nice if there were some answers, if nothing else for going forward. But nobody knows anything. It’s frustrating.”

But John Kruk, a Phillies television commentator who was Daulton’s teammate from 1989 to ’94, said he tried not to let his mind wander in that direction.

“Can I tell you definitely there is no relationship between baseball and brain tumor formation? No, nobody can do that,” said Dr. Henry S. Friedman, a neuro-oncologist at Duke University who treated McGraw and Carter.

“But,” he added, “can I tell you definitively that there is a relationship, that there is something about baseball and the formation in their players of brain tumors? No.”