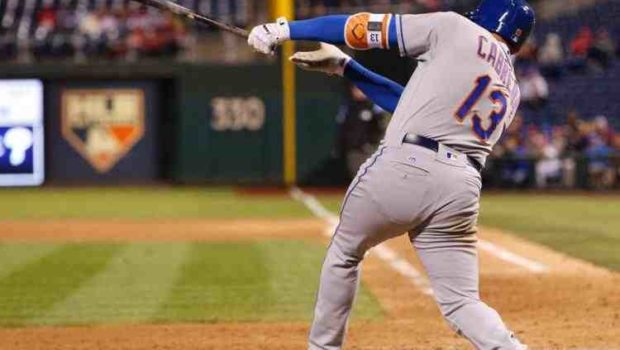 Asdrubal Cabrera hit a three-run homer with two outs in the 11th as the Mets beat the Phillies 7-4.

Cabrera also had an RBI double in the seventh and finished with four hits and four RBI. The teams combined to use 17 pitchers in a game that took 4 hours, 10 minutes.

The season finale today is expected to be Collins’ final game as manager of the Mets (70-91) amid recent reports of friction with the front office — partly over how he’s handled the bullpen.

The Phils already made it official Friday by firing manager Pete Mackanin, who will remain with the team as a special assistant to general manager Matt Klentak in 2018.

Mackanin was in the dugout managing on Saturday and will be again today when the Phillies close out their season.

Cabrera extended a Mets record with the club’s 224th homer of the season, sending his drive to left-center off Adam Morgan (3-3).

Maikel Franco homered for the Phils. His solo shot to left in the second and Cesar Hernandez’s RBI infield single gave the Phillies a 2-0 lead. The Mets got a run back in the fourth and went ahead on Brandon Nimmo’s two-run triple in the fifth.

New York took a 4-2 lead in the seventh on Cabrera’s double, but the Phillies answered with a pair of runs in the bottom half on Aaron Altherr’s sacrifice fly and Rhys Hoskins’ RBI single.

Hoskins nearly ended the game in the 10th, but his drive into a strong wind in left-center was caught just in front of the wall.