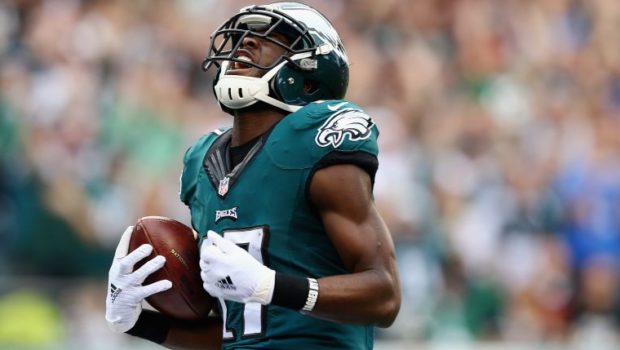 PLAYING CATCH! EAGLES SEARCHING FOR WR’S WHO WON’T DROP IT!

The Eagles need to find someone who can catch the ball!

Nelson Agholor (above) was dreadful.

Only slot man Jordan Matthews was a threat.

Bryce Treggs struggled to make any impact on the offense no matter how many times he took the field.

Paul Turner — though with a smaller sampling size — also had issues but could be given the excuse of not joining the main roster until the end of the season.

With limited salary cap space at the moment, the Eagles will need to be frugal when it comes to free agent signings. Though a reunion with DeSean Jackson could be on the cards, the team remains in need of a true, every down receiving threat. This type of player is what could be had when the Eagles use their first round selection.

Though some see depth in this receiving class, the Eagles cannot take two-to-three years while they develop these players. While Green-Beckham could use time playing behind Jackson, other lower draft picks would be even farther behind him in terms of development. If the Eagles want to win as soon as possible, this development stage needs to be shortened.

One way to do that is to select a wide receiver in the first round. Mike Williams and Corey Davis both come to mind given their size and speed. Both have the raw ability needed to be number one receivers in this league. While a playbook learning curve would exist, they would need less time to develop their abilities than lower draft picks.