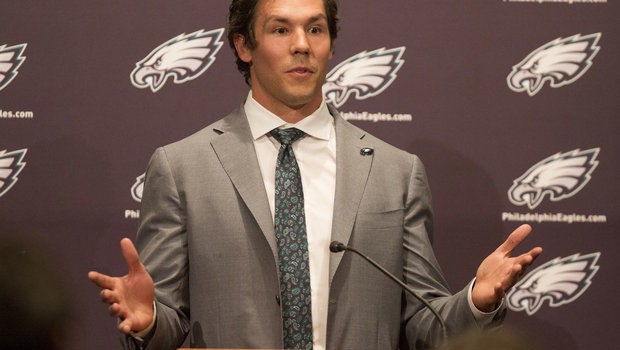 PLAY IT AGAIN SAM — EAGLES TALKING ABOUT EXTENDING HIS PACT

After all the dust had cleared on last night’s first round of the NFL draft, Chip Kelly and the Eagles addressed something that was in their control — unlike the pipe dream of taking Marcus Mariota:

Kelly said last night during the NFL Draft the Eagles have had discussions with Sam Bradford’s agent, Tom Condon, about a contract extension.

The head coach also said there were no truth to the rumors that the team was trying to trade Bradford (photo above).

Currently, the quarterback who the Eagles acquired from the St. Louis Rams for Nick Foles and a 2016 second-round pick, is in the final year of his rookie contract that will pay him $12.9 million.

An extension would both lower Bradford’s salary cap number this year and also give him security that his future will be with the team.

The problem might come in that he has not been able to stay healthy. Bradford is coming off his second torn ACL in as many years and missed the entire 2014 season with the Rams.

Last month an agent told New Jersey Advance Media that Bradford would not sign a contract extension with some of the team rumored to be trading for him, specifically the Cleveland Browns. He said that he would listen to an extension from the Eagles.