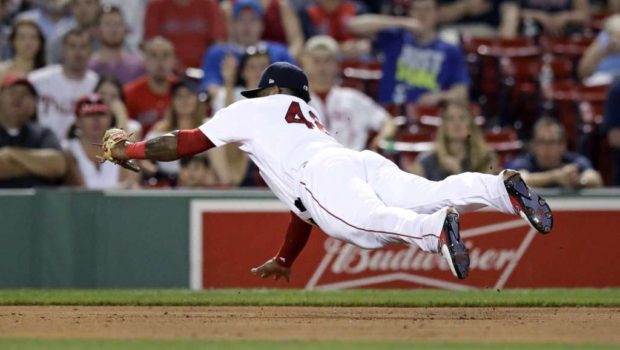 Dustin Pedroia singled home the winning run in the 11th inning to lift the Boston Red Sox to a 6-5 comeback win over the visiting Phillies.

Pablo Sandoval (above) opened the inning with a single off Casey Fein (0-1). Deven Marrero pinch-ran and moved up on a sacrifice. After Mookie Betts was intentionally walked, Pedroia hit a ground single to right and Marrero beat the throw from Aaron Altherr with a headfirst slide on a close play.

After he turned first, Pedroia sprinted hard to foul territory just beyond the Red Sox dugout before his teammates caught him to celebrate.

Hanley Ramirez had tied the game 5-5 in the eighth with a homer. Betts had four hits with three doubles and a single, and Andrew Benintendi also hit a solo homer for Boston, which has won three of four.

Tommy Joseph had a two-run single and former Red Sox Daniel Nava three hits for the Phillies, who have lost 10 of their last 12 games in Fenway Park.

“We played them tough, had chances to win,” Phillies manager Pete Mackanin said.

The Phils Jerad Eickhoff remained winless after 13 starts, giving up four runs on seven hits in six innings. He was in line to get the win before Ramirez homered over the Green Monster off Joaquin Benoit. Cliff Lee was the last Phillies’ pitcher start a season winless in his initial 13 starts, opening 2012.

“It was tough. I was trying to keep us in the game as best I could,” Eickhoff said. “These guys did a really good job of getting us out to a good lead.”

Eickhoff entered with the majors’ lowest run support at 2.37 per game, but the Phillies took care of that right away, jumping ahead 4-0 in the first when Joseph’s two-run single sparked the fast start.

Boston rallied with a run in the second, two in third and one in the fourth. Benintendi hit his homer into the center-field bleachers in the second and had an RBI single the next inning.

Betts’ third double of the game, a liner into the left-field corner, tied it.