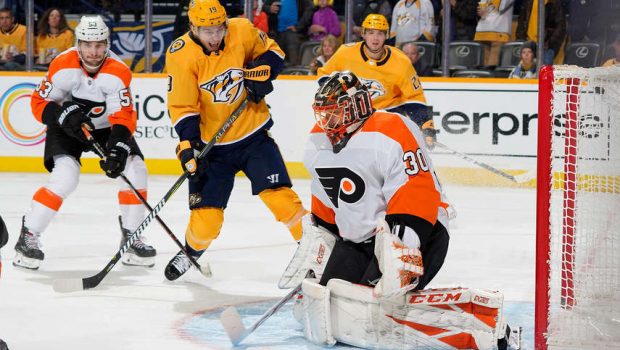 “We got a solid goaltending performance by Michal,” Flyers interim head coach Scott Gordon said of Michal Neuvirth. “All four goals, we beat ourselves on, putting ourselves in the wrong spots. You can’t outscore those mistakes.”

You’ve got to hand it to Scott Gordon:

He has already mastered the worthless talking points inherent in a job coaching the NHL’s worst team.

Michal Neuvirth made 26 saves for the Flyers, who have lost four in a row.

Philly did not convert on either of its power plays in the game. The Flyers have not scored with the man-advantage in their last four games.

“We hit two posts — lot of frustration,” Flyers captain Claude Giroux said. “We’re going to keep working and the power play is going to get back untracked.”

Saros also denied Wayne Simmonds on a breakaway just under six minutes into the third. That save came just before Arvidsson scored his second goal of the night on a wrist shot from the slot at 6:15.

Smith scored the game’s first goal at 2:03 of the second period.

Kevin Fiala skated the puck into the Philly zone on the left side. From the left circle, Fiala sent a cross-ice pass to Smith at the right faceoff dot, where his wrist shot beat Neuvirth high to the stick side just underneath the crossbar.

Fiala has five points in his last three games.

In the left circle, Ryan Johansen drove toward the Philadelphia net before slipping a pass to Arvidsson, who was unchecked at the back post. He tapped it in for his second goal in as many games.

“He’s pushing himself and you see how important he is out here tonight with his speed and his work ethic, his ability to score goals and make a difference in a game,” Nashville coach Peter Laviolette said of Arvidsson. “The line was really good, especially in the second and third period.”

Grimaldi scored his third of the season at 11:37 of the third. He has scored in consecutive games.