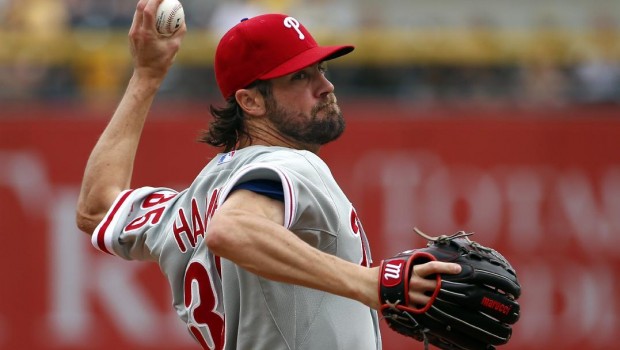 Josh Harrison singled home Neil Walker with two outs in the 11th inning to lift the Pittsburgh Pirates to a 1-0 win over the Phillies Sunday at PNC Park..

Walker singled off Jonathan Papelbon (1-1) to start the late rally. Jose Tabata reached when Phils shortstop Freddy Galvis threw a routine grounder into the stands. Harrison followed with a crisp shot up the middle as the Pirates won their fourth straight.

Antonio Bastardo (2-1) picked up the win with an inning of scoreless relief. The Pirates have swept six series this season, the most of any team in the majors.

Former teammates A.J. Burnett and Cole Hamels (above) spent most of the afternoon overwhelming opposing batters. It was a crisper version of Friday night’s 1-0, 13-inning Pittsburgh win, when both teams combined to leave 30 runners on base and squander countless opportunities. They rarely came on Sunday as Burnett and Hamels put on a spectacular duel.

Burnett, who spent a forgettable season with Philadelphia in 2014 before returning to Pittsburgh in the offseason, scattered five hits in nine shutout innings to drop his ERA to 1.89.

Hamels was just as dominant, giving up four singles in seven innings to go with one walk and 12 strikeouts.

Burnett received more than a little help behind him. Andrew McCutchen made a leaping grab at the center field wall in the first to take extra bases away from Ryan Howard, and Sean Rodriguez went all out to haul in a sinking liner to right Galvis in the fifth.

Hamels didn’t need much assistance, mostly because the Pirates had problems putting the ball in play. His only trouble spot came in the fourth when two singles and a hit by pitch loaded the bases. Jordy Mercer grounded out to third to end the threat and Hamels went back to keeping Pittsburgh’s right-hand heavy lineup in knots.

He retired 11 of the last 12 batters he faced, the final one a meek grounder by Burnett that went right back to Hamels. Rather than run to first, Burnett held up his hands as if to say “I’m good” while his former teammate jogged to record the out.

Burnett, who left $4.5 million on the table to leave the Phillies and return to Pittsburgh, walked off to a standing ovation after getting Howard on a grounder to end the top of the ninth. The 38-year-old raised his glove in appreciation after his 10th start of allowing two or fewer runs.