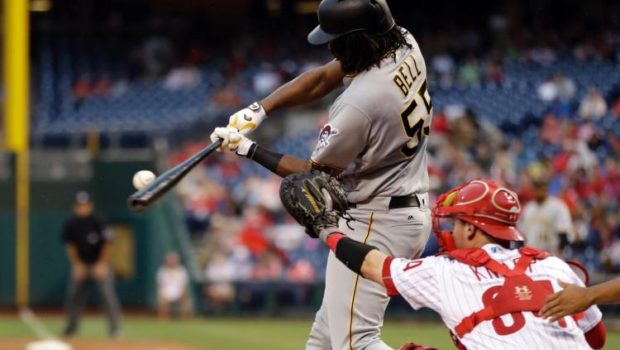 Josh Bell homered, doubled and drove in three runs, and Gregory Polanco had four hits with a home run and two RBI to lead the Pittsburgh Pirates to a 6-3 victory over the Phillies.

Andrew McCutchen added three hits with two doubles for the Pirates, who have won three straight.

Aaron Altherr had two hits and two RBI for the Phillies.

Altherr tied it at 3 in the seventh with a two-run single. However, he was thrown out at second base trying to stretch the single into a double. It was the second time that happened to Altherr and the third time to a Phillie in the game. Odubel Herrera was caught trying to reach second right after Altherr in the second inning.

“If those were closer plays, it wouldn’t have been a big deal,” Phillies manager Pete Mackanin said. “But when you’re out by that much, I think they should’ve shut it down.”

Left fielder Jose Osuna got an assist on all three plays. The last time the Pirates had three assists by an outfielder was 1991 when Cecil Espy did it.

The game was delayed 47 minutes at the start by rain and was played under a persistent drizzle for most of the night.