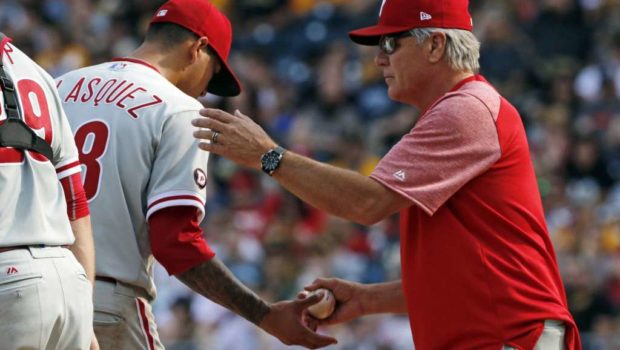 Ivan Nova was too much for the Phillies yesterday.

He pitched into the eighth inning, leading the Pirates to a 6-3 victory over the Phillies.

Nova (4-3) allowed three runs and nine hits in 7 1/3 innings for first victory in four starts since April 29, a three-hit shutout of the Marlins at Miami. The NL Pitcher of the Month in April struck out three and walked none.

Francisco Cervelli and Adam Frazier hit two-run singles during a four-run sixth inning that extended the Pirates’ lead to 6-1. Freese’s leadoff home run, his fourth, in the fourth inning broke a 1-1 tie.

Frazier had three hits and Cervelli and Freeze added two each as the Pirates won for the fifth time in seven games and sent the Phillies to their 16th loss in 20 games. Philadelphia has not won consecutive games since a six-game winning streak from April 20-27.

The Phillies cut the lead to 6-3 on an RBI single by Cameron Rupp in the seventh inning and Aaron Altherr’s run-scoring double in the eighth that chased Nova. Juan Nicasio got the last two outs in the eighth and Tony Watson pitched a perfect ninth for his ninth save.

Cesar Hernandez, Freddy Galvis and Velasquez each had two hits for the Phillies and Altherr had two RBI.

Altherr drove in the game’s first run with a first-inning groundout and Andrew McCutchen tied it with an RBI single in the third.