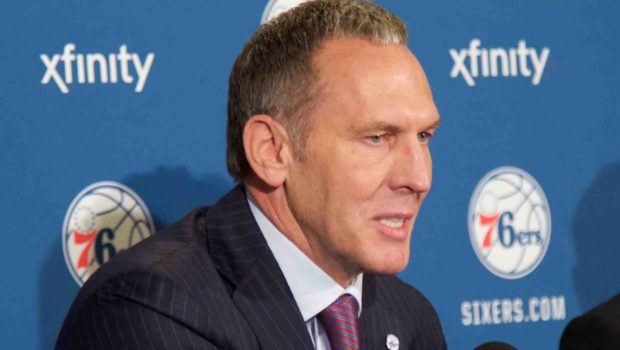 Sixers big boss Bryan Colangelo won’t rule out anything about the No.3 pick in the June 22 NBA draft:

Either whom the team will pick or whether it might trade it!

“I think there’s a number of things that we’ve listened to and heard in terms of interest about our pick,” Colangelo said today. “It’s the time of year that you have to explore everything – we’re going to look at all options. It doesn’t mean we’re going to do something with the pick, but I have to listen, and also seek out what kind of value number three has.”

Colangelo estimated that the Sixers have identified “six or seven names…who we would really be happy with” at number three.

“That sounds like a lot right now,” said Colangelo, “but [picks] one and two are going to go off that list, and now you’re down to a more finite number. We’ve got to be ready for any scenario. In a couple of the trade scenarios, maybe it’s moving up, maybe it’s moving down. I can’t assure or promise you that’s going to happen, but we need to be prepared for those situations.”

“This next couple of weeks will be a deep dive into the individual and group workouts here,” said Colangelo. “This is the fun time of year, this is when things really get to pick up steam as it relates to that team-building process.”