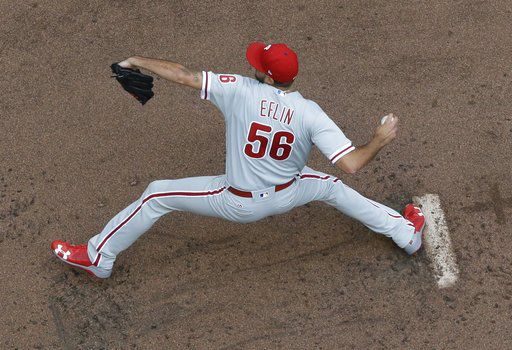 PHILS ZACH EFLIN SERVES UP 3 HOMERS IN THE 3RD INNING!

Want to know how about the third inning was last for Phils starter Zach Eflin?

He threw a first-pitch curveball to Marlins third baseman Brian Anderson to open the bottom of the third. It was Eflin’s first and only curveball of the night, and Anderson crushed the pitch 435 feet to center field for a solo home run. Eflin then threw a 1-1 changeup to Neil Walker, who also homered.

Later in the same inning, Austin Dean hit a first-pitch fastball for a two-run homer to left field to make it 6-0.

“A couple pitches were location, but for the most part, I honestly thought I had really good stuff,” Eflin said. “I felt really good in the first and second inning, and after that it seemed like they started jumping on my stuff. Just one of those games where the cards didn’t go my way, so swallow it, flush it, come back out in five days.”

Phillies starters have a 5.04 ERA. They have allowed five or more runs in four of the team’s 13 games, each of which has come since the team’s 4-0 start. Only the Red Sox (nine starts of five or more runs), Rockies (seven), White Sox (six) and Athletics (five) have had more such outings.

“I think what it causes us to do is to really dig in and work,” Kapler said. “It means we just have to watch more video with our guys. We have to identify flaws and we have to make good suggestions. It’s on us.”