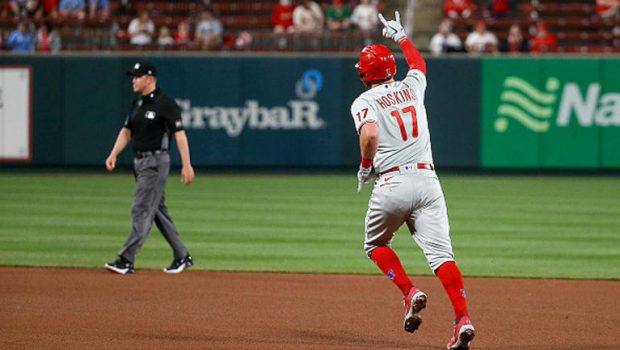 So, this is the pattern the Phillies have developed to win games early in this season.

Lights-out pitching and the longball.

Zack Wheeler took a one-hit shutout into the ninth inning and Rhys Hoskins homered twice as the Phillies beat the St. Louis Cardinals 2-1.

“I don’t think you’re going to see it that often. … It was cool to see an old-fashioned ballgame,” Phillies manager Joe Girardi said. “It was neat to watch.”

Wheeler retired his first 14 batters until Paul DeJong’s opposite-field single to right ended the streak in the fifth.

“When the command is there, it makes it easier,” Wheeler said. “Me and J.T. (Realmuto) were on the same page. It was a lot of fun.”

The right-hander helped himself with some quick thinking in the sixth. After a walk to Justin Williams opened the inning, Wainwright popped up a bunt.

Instead of catching it on the fly, Wheeler allowed the ball to fall at his feet. He picked it up and started a 1-6-4 double play to end the threat.

“You could see how uncomfortable their hitters were,” Hoskins said. “A couple guys who did get on first said to me his stuff was exploding out of his hand. Huge performance by him.”

Wheeler was lifted after issuing a leadoff walk to Matt Carpenter in the ninth on his 114th pitch. Héctor Neris got the save, but not before Carpenter scored on a groundout by Dylan Carlson.

The performance stopped a string of three rough outings by Wheeler in which he gave up 10 earned runs over 16 2/3 innings.

“When you have a couple subpar games, you want to get back out there on the right foot,” Wheeler said. “I wanted to get the W for us.”

Wainwright (0-3) tossed a complete game on 107 pitches, allowing six hits and striking out eight. His only costly mistakes came to Hoskins in the seventh and ninth as the Cardinals’ winning streak was snapped at three.

“I didn’t make any mistakes with my cutter until that last one to Rhys,” Wainwright said. “He’s not going to miss pitches like that and I gave him two cookies right over the middle of the plate.”